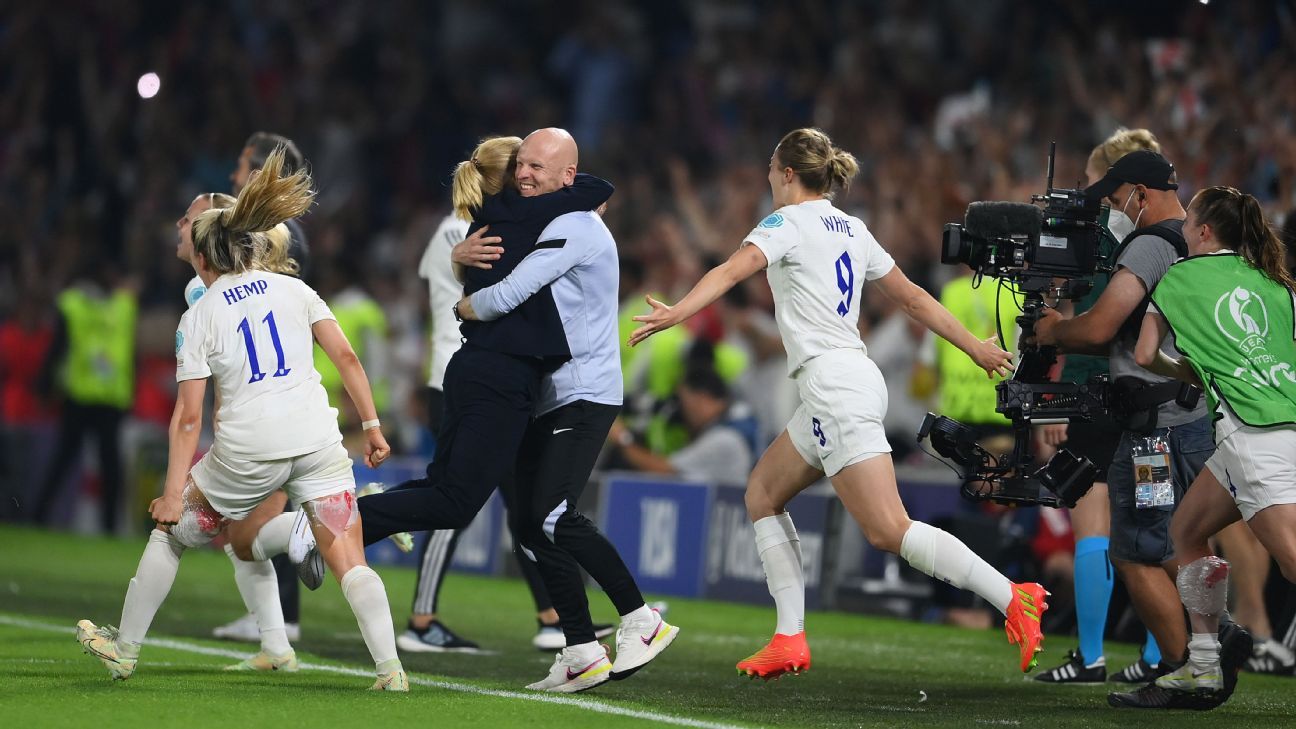 England coach Sarina Wiegman said she “went a little crazy” when the final whistle went after her side came from a goal down to beat Spain 2-1 in their 2022 Women’s Euro quarterfinal.

Spain went ahead through a goal from Esther Gonzalez on 54 minutes before Ella Toone equalled late on to send the game to extra time. Georgia Stanway then scored a rocket to send England into the semifinals.

Wiegman had missed her side’s final group match after she tested positive for COVID-19 and only found out late on Wednesday that she would be able to be on the sidelines.

Normally incredibly composed on the sideline, Wiegman was jumping up and down and cheering when the final whistle went.

“I think I went a little crazy. I was so happy,” she said of how she felt at full time. “This was so close and such a good game. It could have gone both ways all the time. So I was so happy.

“I think we showed resilience. We came from behind and at the end of the game, from 80 minutes. We changed shape and then we scored a goal quickly so we could go back to our shape and I think in extra time when we scored, we were a little better.

“I think, in that moment, we were fresher. I think for the fans in the stadium and people watching on TV, it was an incredible game.”

Defender Millie Bright, who was named Player of the Match and put in a solid performance in the first half when a lot of England’s squad struggled, reiterated Wiegman’s comments that England had shown their character.

“It is massive. Football is about momentum and keeping people in a good place. Nothing changes going into the semis,” Bright said. “We showed our true character and we showed our talent on the ball as well.”

Both Wiegman and Bright were also keen to emphasise the impact of the substitutions. Toone replaced Fran Kirby on 64 minutes and had an immediate impact while Alessia Russo set up her Manchester United teammate for the goal.

“Every game, the subs have an influence. It shows the depth in our teams and the eagerness of every player to start,” Wiegman said. “But everyone is also all the time on the same page. They do that so well and we’re all supported and everyone knows their role.”

Bright added: “I’m glad that we can demonstrate that, because we have talked about that [squad depth].

“Our substitutes have taken us to the next level when they came into the game. I thought they were incredible. In a game that is so mentally and physically tough, they do really boost you.”

England, who has never won the European Championship, will play either Sweden or Belgium on Tuesday in its sixth appearance in the semifinals.