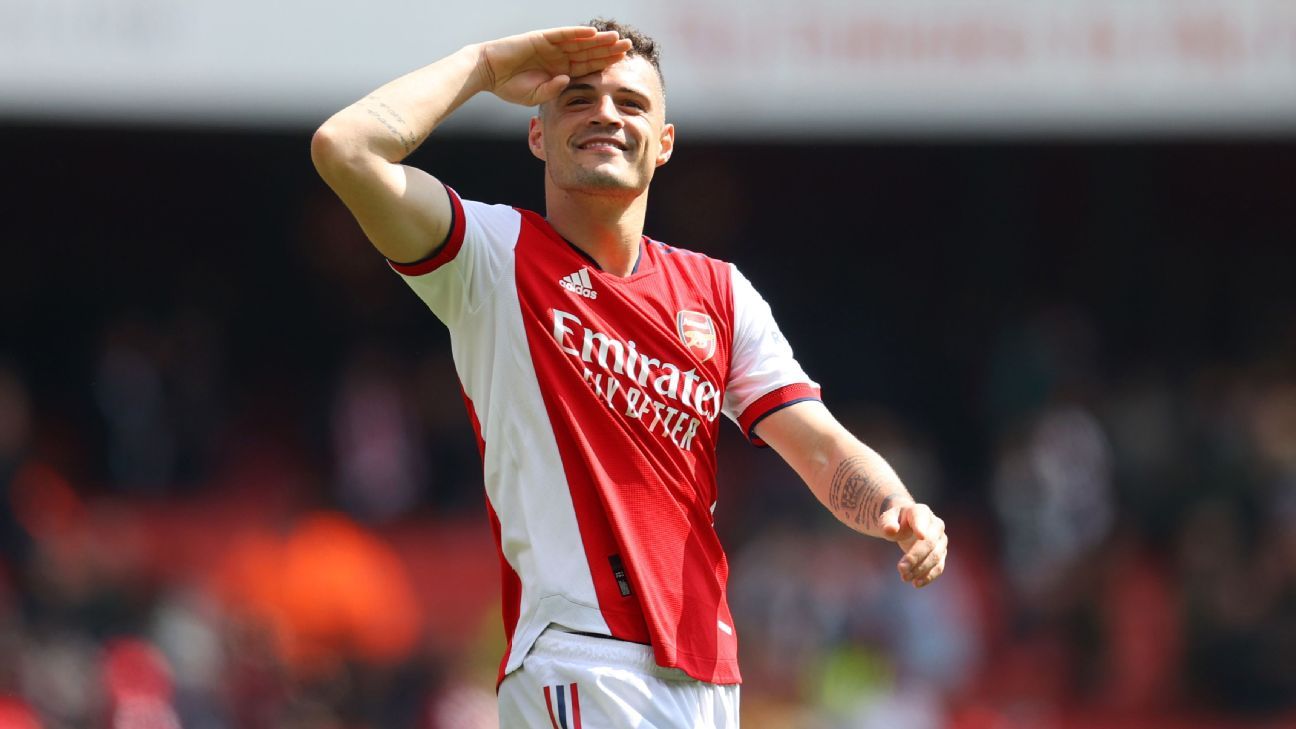 BALTIMORE, Md. (MD) — Granit Xhaka rarely holds anything back, and he isn’t about to start now. The 29-year-old is as robust in the tackle as he is in an interview chair, a no-nonsense character whose passion and drive have inadvertently taken him to some contentious places during his six years at Arsenal. Managers have come and gone, his relationship with supporters has ebbed and flowed dramatically, but Xhaka remains a constant presence in the team. Another season; another new start.

The Switzerland international sits down for an exclusive chat with ESPN at Arsenal’s team hotel in Baltimore, the Sagamore Pendry, located on Recreation Pier in the city’s Inner Harbour, fresh from a summer vacation in which he visited Albania to see close family members for the first time in almost three years due to the COVID-19 pandemic. He is not naturally one for looking back, but time away with his wife, Leonita, and their two children, Ayana and Laneya, allowed for fresh perspective on recent events. And in Xhaka’s case, there is plenty to reflect on.

Perhaps the logical starting point is the reaction to his Players’ Tribune article in April, a first-person account entitled “Let Me Set a Few Things Straight” in which the midfielder sought to address his complicated relationship with Arsenal fans, a combustible dynamic that reached critical mass in October 2019.

Arsenal were drawing 2-2 against Crystal Palace when Xhaka was substituted by then-Gunners boss Unai Emery. He was slow to leave the field, and thousands of fans let him know it, jeering in fury. Xhaka cupped his ear to the crowd, threw his shirt to the ground and mouthed “f— off” in their direction before disappearing down the tunnel. All while being club captain.

Xhaka, who was subsequently stripped of the armband by Emery, admitted he was wrong to react but went on to convey a side to him that has been key in his restoration from that dark day: the humble, hardworking, vulnerable and honest character that his teammates and current manager Mikel Arteta value so highly.

“Everyone knows the period I had with the fans,” Xhaka tells ESPN. “A big misunderstanding in my opinion, from them, from me. But I play football because I have a lot of passion. I am here more than six years. I was in Germany for four years, in Switzerland I was two-and-a-half years a professional. So this is more than the other two clubs where I was. I love the club, I love the people around [it]. They treat me every time with a lot of respect, I try to give the respect back.

“I needed to say the reality and the truth — I had good and positive reaction from the people outside, from our fans, but as well from normal people. It was as well the right timing to say something about it, what happened two-and-a-half years ago. I feel the connection again between myself and the fans is much better than before. I always wanted to give them the right Granit, not to see me like they were thinking about me.

Xhaka is referring to the darker excesses of social media. For the past two years, he has taken advice on his online activity and does not engage with it personally — “Other people around me are helping me with what to do, when to [post something] — if I do it today or tomorrow, if we lose or not.”

But the most important counsel has come from Arteta. The Spaniard convinced Xhaka not to quit the club at the start of 2020 in the initial aftermath of the Palace incident, when a move to Hertha Berlin required only the player’s signature for completion.

Arteta has since radically overhauled his playing squad — only five of the starting lineup from his first game in charge at Bournemouth on Dec. 20, 2019, are still at the club — but Xhaka is an integral part of his new-look side. Since Arteta took charge, Arsenal have a 53% win record in the Premier League when Xhaka plays (40 victories from 76 games) compared to 45% (nine victories from 20 games) when he doesn’t.

“Without him [Arteta], I would not be here in this football club anymore,” Xhaka said. “He helped me a lot when I was completely down. He took me aside, helped me with small things, step by step, tactically, as a person, mentality, between the team and the club, tried to help me as well with the fans. He is a freak in a positive way. Tactically, he knows everything. How he prepares the team before training, before the games, is unbelievable. I had a lot of coaches, but I have to put Mikel as one of the top ones in my career.”

Despite their palpable bond, Xhaka confirms that he almost left Arsenal last summer. Jose Mourinho became Roma boss in May 2021 and was rumoured to have identified Xhaka as a key target.

Was it true?
“It was something, yes.”
How close?
“Very close.”
Why didn’t it happen?
“Because Mikel was the guy with [technical director] Edu, they didn’t let me go because they wanted to keep me here. Of course, my first reaction was to stay at the football club, but they opened the door: ‘If something comes, I can leave.’ I have to be honest as well. I don’t want to say a name now, but the door was open for me to leave the club as well. But in the end, people decided to keep me here.”

“That’s why age is only a number for me. As long as I am fit, as long as I can help the team, I will try to do everything. When the moment comes, I can’t do that, I am the first to say to the club: ‘I am not ready to do that.'”

Xhaka has been inspired by Arsenal’s development under Arteta, a progression which began following Emery’s sacking as Arsene Wenger’s successor amid widespread rumours of a fractured dressing room. “Mikel [came in] with a lot of ‘problems’ [Xhaka raises his hand to signal inverted commas to accompany the word],” he said. “Maybe the word is too hard, but a lot of stuff where it was not in a good place, maybe. He changed a lot, if I am honest.”

Were they overplayed? “Absolutely, the problems came here from outside. The people said, ‘This football club has problems with this and this and this,’ when it was not so, so, so bad as the people say,” Xhaka explained. “Of course you have everywhere, little stuff in every club, it is not only in our club. But Mikel decided to change some things.”

Arteta oversaw a restructuring of the club that ranged from streamlining the scouting network to paying up contracts of disaffected players, like Mesut Ozil, Shkodran Mustafi and Sokratis Papastathopoulos, to help accelerate a cultural overhaul. After finishing eighth in 2020-21, the changes helped take Arsenal to the brink of Champions League qualification last season, only to fall short on the final day by two points.

In the penultimate game of the campaign, Arsenal were beaten 2-0 at Newcastle to surrender their advantage in the race for Champions League qualification to Tottenham, one they knew trudging off the St James’ Park pitch they would not recover.

As he often does, to his credit, Xhaka fronted up to the media afterward, telling Sky Sports with trademark bluntness that “you need people to have the balls to come and play” and “if someone isn’t ready for this game, stay at home.”

Some interpreted that as a senior player pointing his figure at others but, not for the first time, Xhaka felt misconstrued.

“Everyone knows we have a very young team, but this is not the problem of young or old,” he said. “This was not against our young players. I put myself there as well. We were not ready for this game, to fight. We knew if we won this game, we would have another final against Everton at home [on the last day of the Premier League season.]

“The thing is about the mentality — when you have something, you can take it — it is not the first time we let it down. A lot of people start to think, ‘Yeah he’s speaking again,’ and stuff like this, but maybe they didn’t understand what and how I mean it. If I can say now something about this interview, I told you: this has nothing to do with the young players, it is do with us all together. It doesn’t matter the age. I think I said that as well after the game — it doesn’t matter the age, you have to be ready for these games because these games you have maybe once a season and you have to be ready to take it. If not, you are out of the Champions League places.”

Arsenal finished the season lurching from brilliance to disaster — three defeats in a row against Crystal Palace, Brighton and Southampton preceded four straight wins, including beating Chelsea at Stamford Bridge and Manchester United, before two consecutive defeats at Tottenham and Newcastle effectively ended their hopes. It is this inconsistency Arsenal must eradicate.

“Absolutely,” Xhaka says in response. “We had games where nobody was thinking we could beat, for example, Chelsea away. We beat them. United was maybe a 50-50 game at home, we knew we had to win the games but then we lose against Brighton at home, Southampton away, Palace away and it hurts in the end. It is painful because you have everything, you need maybe only two points from the three games.”

Faltering in key moments is an accusation often levelled at Arsenal, a mindset Arteta has actively tried to harden through greater work ethic, professionalism and focus.

“If the situation comes again, we have to be much cleverer, much different, in a different mentality,” Xhaka said. “If something is not going well with the ball, we have to change the game. This happened against Palace as well, away, when we were smashed 3-0. We want to play, to play, to play. We lost balls and they scored. First of all, you have to be ready to fight. After, you can do the other things. This is my opinion. This is what Mikel wants from us, to be ready from the start. In this game against Newcastle, we were not in the game from the start to the end.

“But I don’t believe that our season was gone because of the Tottenham and Newcastle games but before. We have Southampton, Brighton, Palace where we lost and this was the killer in my opinion.”

A familiar refrain from Xhaka is that he wants to “achieve something special” at Arsenal. Despite last season’s disappointing denouement, there is fresh optimism for the future. The mood during Arsenal’s preseason camp in the United States has been upbeat, buoyed by the arrival of four new signings: Gabriel Jesus, Fabio Vieira, Marquinhos and Matt Turner. More are expected. So what target has Xhaka specifically set?

“I can see something is growing here. Sometimes you need more time than the people want, but I have a feeling that we are in a good way. Last season, we were very close to achieving something and this season, let’s start and after we can speak again after 38 games. Hopefully we are where we want to be.”

Whatever happens, you know Xhaka won’t hold back.