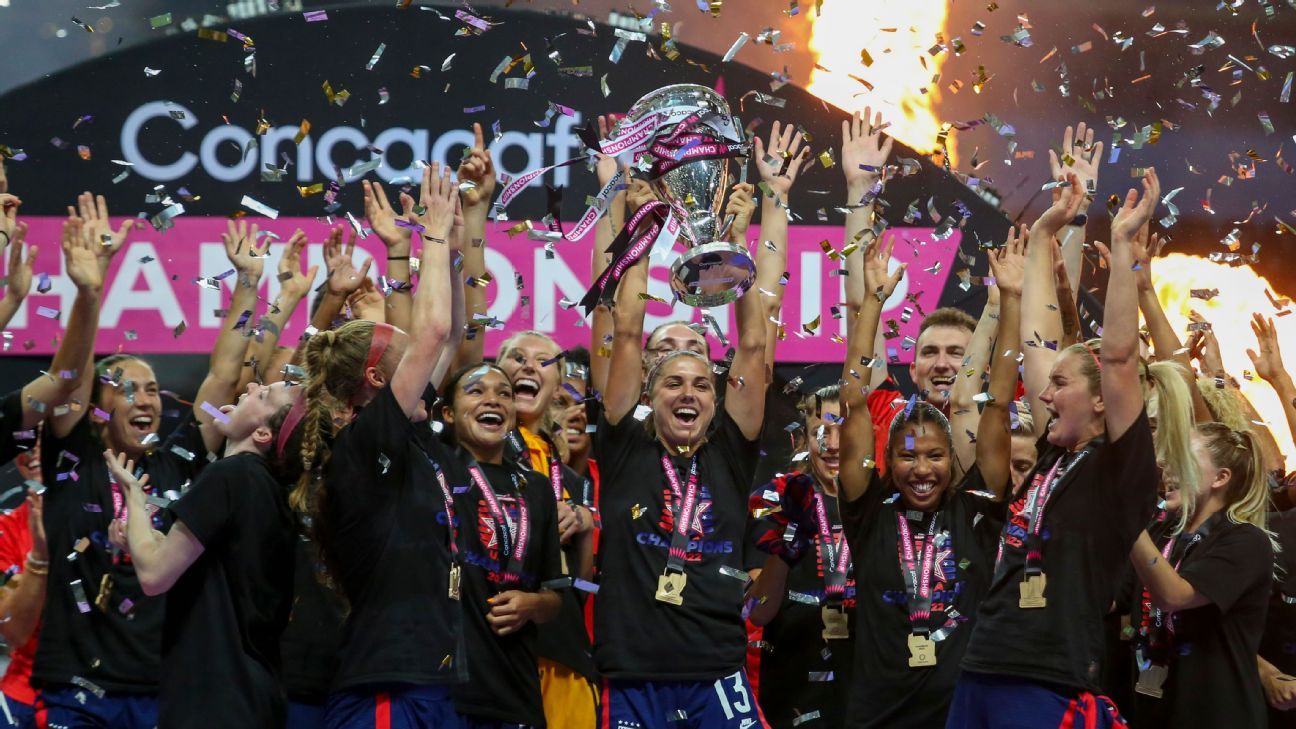 MONTERREY, Mexico – In the end, it had to be Alex Morgan.

The United States defeated Canada 1-0 on Monday at Estadio BBVA to win the CONCACAF W Championship and clinch a berth in the 2024 Olympics. It was the most convincing performance of the tournament from the Americans, one that oozed with the confidence that has defined the USWNT for generations.

Still, the demons of failing to finish quality opportunities followed them into the final. Early pressure did not lead to any goals and even tap-ins from inside the six-yard box were repelled — Sophia Smith‘s shot in the final seconds of the first half being kept out by goalkeeper Kailen Sheridan.

But when Canada defender Allysha Chapman fouled Rose Lavelle in the box with less than 15 minutes to play it was Morgan, who has been at the center of every major U.S. moment of the past decade, who stepped up to the penalty spot and buried the kick for the only goal of the game.

His last point is salient for a U.S. team mostly lacking that experience outside a few key veterans. Twelve players on the United States’ CONCACAF W Championship roster have 20 caps or fewer.

The U.S.’s victory restored order both regionally and globally. Canada defeated the United States in the semifinals of last year’s Olympics, forcing the U.S. to settle for a bronze medal as Canada marched to its first major-tournament victory. What followed for the U.S. was 11 months or rebuilding — soul-searching, even — as Andonovski parted ways with several veterans who were at the core of the team’s back-to-back World Cup titles in favor of young players who he believes will carry the team at the 2023 World Cup and beyond.

With a place at the 2023 World Cup also achieved by reaching the semifinals of this competition, now is the time to get those players the experience they will need for the bigger stages. That process has been a difficult one at times. The task was and remains unforgiving: develop a new core of inexperienced players without sacrificing results. This victory over Canada, then, is a proof of concept.

“I almost get emotional, because the vibes with the team are really incredible,” said U.S. midfielder Andi Sullivan, who played in her first qualifying tournament with the team. “The blend between the senior leaders and the young players, for some it’s their first tournament or for some players this is their umpteenth tournament, and I think that blend is incredible.

“That energy today was almost like, after a long trip, a long tournament, one of the most joyous days that we had was today. And I think that speaks a lot about this group and I think we got to celebrate that a lot on the field and after the game.”

Winning Monday’s final does not erase important questions for the team. The U.S. struggled in individual defensive moments against Haiti and, at times, labored through the process of breaking down the low blocks of Mexico and Costa Rica.

There are also questions across every line of the field about who should be starting. Veteran goalkeeper Alyssa Naeher returned to the net for the final after Casey Murphy started three of the four other matches at the tournament, including the semifinal. The back line has rotated at least one member each game, and the midfield looked disconnected at various points of the tournament. Finishing was also an issue.

All those concerns are valid but come with the context of the moment in which the Americans find themselves. They have done what was asked of them, both stylistically and from a results perspective. They worked behind the scenes and improved from the start of the tournament to the final, when this group of new players put in its best performance to date.

From the opening minute, the U.S. was on the front foot, setting the tempo and putting pressure on Canada’s back line. Mallory Pugh forced Sheridan into a save just 40 seconds into the half, and Morgan sent a curling shot just wide of the far post three minutes later. Smith had the best opportunity of the first half in the final seconds, but couldn’t cleanly connect with the ball for a tap-in.

The finishing might have lacked, but the energy and chance-creation was exceptional from the U.S., whose expected goals on the night was 3.14 compared to Canada’s 0.53, according to TruMedia/Stats Perform. And the U.S. has now prevailed over Canada in all 10 CONCACAF finals in which they have met.

Captain Becky Sauerbrunn, 37, is one of the few remaining veterans on the team. She was the defensive anchor to both the 2015 and 2019 World Cup-winning teams. On Monday, sitting on yet another stage with confetti raining down on her and pyrotechnics behind her, Sauerbrunn held the CONCACAF W Championship trophy as the team posed for photos. Next to her sat Morgan, holding the Golden Ball as the tournament’s best player. The two veterans were at the center of the group, surrounded by a much younger squad of faces who had not been on a stage like this before.

“You can’t replicate these types of games with friendlies and domestic tournaments,” Sauerbrunn said. “When something is really on the line, when your future is on the line, to have that pressure, to let the younger players experience that and to kind of get used to being that uncomfortable — because it is uncomfortable.

“One mistake can lead you to potentially not qualifying for the World Cup: that’s huge stakes. So, to have that pressure and to thrive under it is what this team has always been known for. So, to get these younger players under that type of environment and get them used to it I think is only going to help us in the future.”

Andonovski called Emily Fox, Pugh, Smith and Sullivan by name after Monday’s victory as he discussed “players that are going to be here for at least three, maybe four World Cups,” adding, “so get used to them.”

These 20-somethings are the future of the U.S., one which is still taking shape and going through some growing pains. They still need time to be ready for the World Cup, but that is a year away. And they are not going through the process alone or without the help of veterans like Morgan, still a focal point of the team.

“For her to be on the field to showcase that and to have Mal and Soph on the side next to her, that’s a big win for us,” Andonovski said. “That’s a big win for this team — and for the country — because those two, they are going to have to take that over. What a better way to learn than on the spot from one of the best?”

MLS to probe alleged racial slur in Miami-D.C.
Messi: I endured ‘bad time’ in first season at PSG
England suffer NL relegation after Italy loss
Gomez still open to Mexico despite U.S. U20 start
Under the ‘Scaloneta’, Argentina have a foundation for Messi and Co. to thrive at World Cup