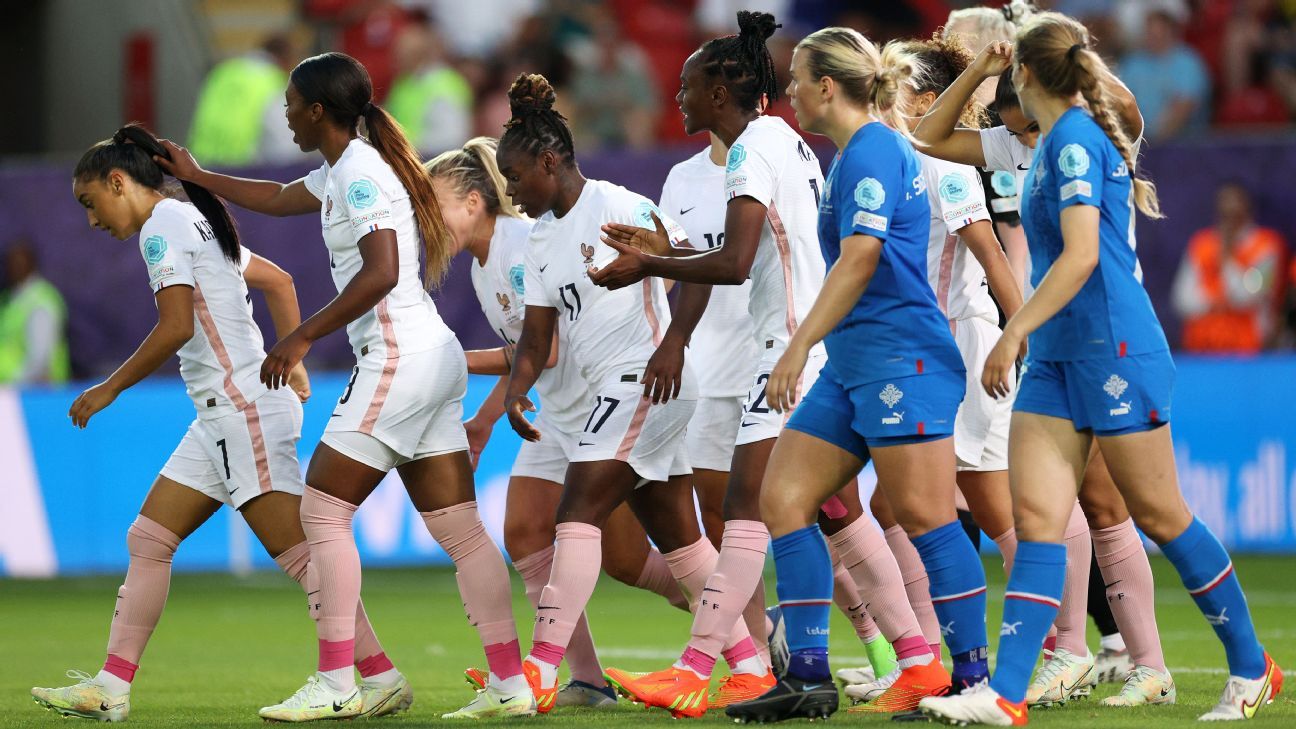 France forward Melvine Malard scored the fastest goal of the 2022 Women’s Euro, but Les Bleues wound up drawing 1-1 on Monday with Iceland after an equaliser deep into second-half stoppage time.

Iceland became the first side ever to go out of the tournament despite remaining unbeaten. After previous 1-1 draws with Belgium and Italy, Icelance maintained their quarterfinal chances going into the last group game, but Belgium’s 1-0 win over the Italians secured them second spot in Group D on four points.

It took 43 seconds for forward Melvine Malard to put already-qualified France ahead with a low shot from the edge of the box, making it the quickest goal of this year’s tournament so far.

Having scored eight goals in the tournament so far, France have improved their best ever total in a Euro group stage by one strike.

The French dominated the opening stages of a game that was being contested in extreme heat, with Britain braced for hottest temperature on record this week.

But Iceland, who grew into the game as the first half wore on, came close to equalising in the 11th minute when Sveindis Jane Jonsdottir’s header bounced off the crossbar.

Forward Berglind Thorvaldsdottir wasted another great chance just before halftime after she received the ball from a corner kick but fired her effort over the bar despite being unmarked.

Iceland continued to give absolutely everything in the second period, as midfielder Agla Maria Albertsdottir and captain Sara Bjork Gunnarsdottir also came close to scoring.

Corinne Diacre’s France, one of the tournament favourites, then saw two goals ruled out by VAR.

First it was Malard, who thought she had bagged her second of the evening in the 68th minute, but was ruled offside. Grace Geyoro netted 20 minutes later, but the goal was disallowed for handball.

Iceland, who were awarded a penalty in the dying minutes, grabbed a consolation goal in the 12th minute of stoppage time through Dagny Brynjarsdottir, making history as the only team to ever go out of Euros despite not losing once.

“I’m very disappointed that we didn’t go through but at the same time I’m extremely proud of the team,” Iceland defender Glodis Perla Viggosdottir said.

“I think we played very good game today, we are undefeated in the group. But unfortunately that wasn’t enough.”

The last-gasp goal by Iceland ended France’s 16-match winning run, leaving them one short of equalling their all-time record of 17 consecutive wins, set between August 2011 and July 2012.

“This evening I was able to give playing time to other players, and that went very well. We (also) have no new injuries… and that is important,” France coach Diacre said.

“We need to be more clinical. If we can take all our chances that would be much better. But what matters is creating chances, if you don’t do that you can’t score.”

France, who made a dream start to the tournament by thrashing Italy 5-1 and secured their place in the quarterfinals after their 2-1 win over Belgium, will face the Netherlands on Saturday.