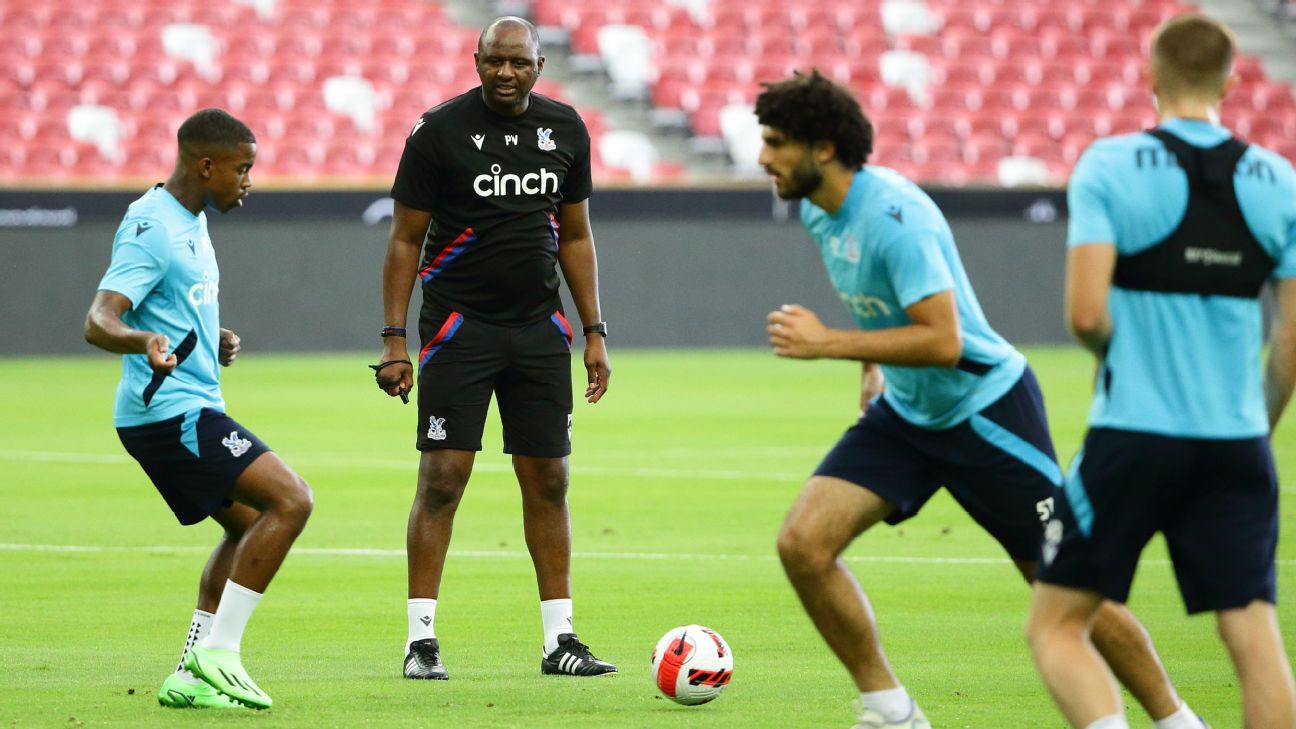 Crystal Palace manager Patrick Vieira acknowledged that his side’s disrupted preparations for the 2022-23 Premier League season are “not the ideal situation,” but still believes there are benefits to be gleaned from his side’s tour of the Asia Pacific.

Palace will face Manchester United in the second game of their preseason tour on Tuesday, taking on the Red Devils at the Melbourne Cricket Ground in front of what is expected to be a 70,000 crowd four days after they were downed 2-0 by Liverpool in Singapore.

They will then make the approximately 1700-mile trip from Melbourne to Perth to take on Leeds United on Friday, before then returning to Europe for a friendly against French side Montpellier on July 30.

The long time spent in transit and the limited time spent on the training track that sides face during these tours is a toll universally extracted; a sacrifice deemed worth it due to the commercial and reputational boosts that a club can source.

Palace, however, are facing an extra level of complications than the standard drawbacks of preseasons on the road. Whereas Manchester United, Leeds, and Aston Villa have brought close to full-strength squads for their tours of Australia, Vieira has been forced to split his in two for the trip – with just a handful of senior outfield players having made the trip Down Under.

Wilfried Zaha, Eberechi Eze, and Marc Guehi all remained behind in England with assistant manager Osian Roberts and first-team coach Kristian Wilson for a series of preseason matches against lower league English opposition, denying the Palace manager a chance to build cohesion in the build-up to his side’s Premier League opener against Arsenal on Aug. 6.

“I think it’s not the ideal situation for a manager to have so many players behind,” Vieira told journalists before his side staged an open training session on the MCG on Monday. “But on the other hand, we are really pleased as a football club and myself as a manager to be part of this tourney. We went to Singapore, we are in Australia today and when we look at our squad, we have so much young talent in our squad.

“To have this kind of experience for them, I think, it’s something unbelievable for them. We have some of the young players who have never gone outside of Europe.

“We are now in Australia and we are going to play against United in front of 75-80,000 people and that is exciting for them. We’ll put them in a situation where we will learn a lot from them as well and, of course, we have some senior players here who need to play games because we’ve been travelling a lot, we don’t do much training, those games are really important for them to build their fitness.”

The reasons for the split Palace squad are varied. Some players, such as newly signed midfielder Cheick Doucoure, were simply added to too late to make the trip. For others, the club said when announcing its travelling squad that some players weren’t fit enough to make the trip and that others “did not meet the entry requirements for Singapore or Australia when travel arrangements were made.”

Individuals entering Singapore are required to be fully vaccinated against COVID-19 and Australia, after previously having some of the most stringent criteria in the world during the height of the pandemic, only lifted its vaccination requirement for entry on July 6.

“I think it’s important to understand that these players are staying behind for different reasons,” Vieira said. “We’re not going to talk about the private situation with the players, if they are vaccinated or not.

“There are players that have stayed behind because they needed to have more training, some of them needed to play more games, more minutes and we just try to look at the situation and make the best of this situation possible for us; to try to be competitive in the first game of the season.

“So we have a group of players who have stayed behind, we have a group of players who are here and these games are big games for us. You can see the games that we played in Singapore against Liverpool. I think it’s really difficult to find this kind of atmosphere and these kinds of games in the preseason, so that was really good preparation for us and I’m sure the game will be the same.”

If these circumstances weren’t trying enough, Palace is also working against the weight of history when it comes to league form and overseas tours. Since the birth of the Premier League, overseas tours have almost universally correlated with slow starts to the domestic season for the club.

Their most recent tour — the 2017 Premier League Hong Kong Trophy — was followed by seven straight defeats to start the Premier League season, with new boss Frank de Boer sacked after the first four of those losses in which the team failed to score a single goal.

And with Arsenal, Liverpool, Aston Villa, Manchester City, and Brentford awaiting Palace in their first five games, any shred of form that can be taken from the preseason could prove vital.

“I wasn’t here in the past,” Vieira said. “What is really important for me as a manager is trying to prepare the team as best we can to start the season well.

Arabic football terms you should know ahead of the World Cup in Qatar
Messi double as Argentina beat Honduras in Miami
Spain stunned by Swiss to relinquish top spot
Southgate: I’ll risk my reputation for Maguire
Real knock off Atleti in fiesty Madrid derby