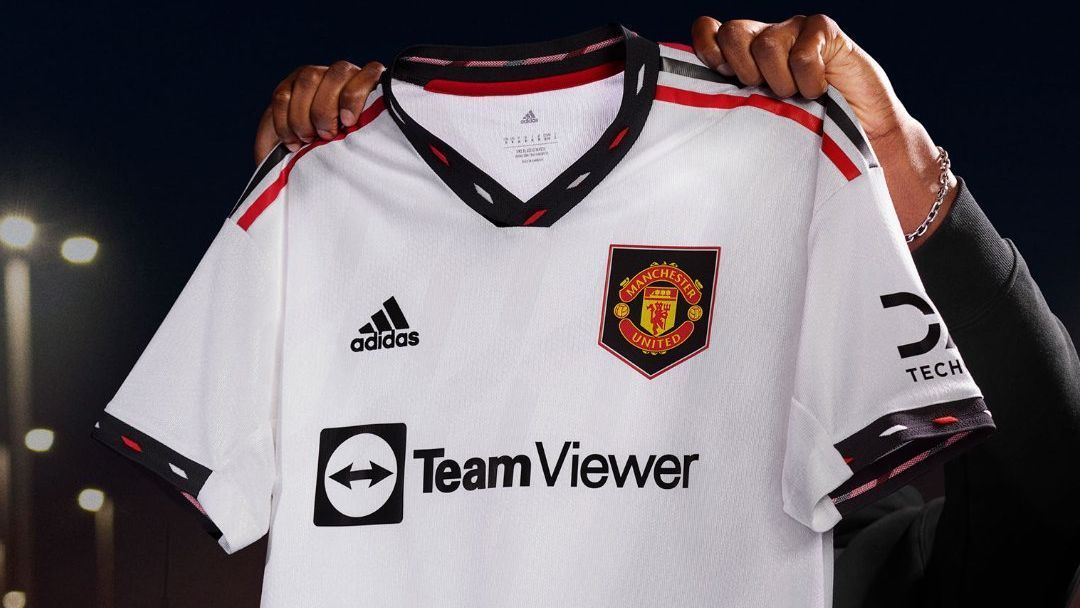 Hot on the heels of their new home kit, Manchester United have rolled out their even newer away kit for the 2022-23 season.

In a similar vein to the home strip launched last week, United’s latest away kit is a homage to some of the club’s most famous ensembles down through the years.

The home shirt featured subtle design flourishes inspired by United kits dating from the early 1980s all the way through to the 2000s, and the away jersey is no different.

First and foremost, the classic white base returns for the first time since 2015-16, having been used as a secondary colour by United since the early 1900s.

🌃 Day or night, dressed in white.

United have had many white away kits since then, though the 2022-23 vintage certainly most resembles those worn in the mid-1970s, through the 1980s and even right up to the iconic “Sharp Viewcam” banded away strip worn on the road by the Treble-winning side of 1999.

It’s time to put our 2022/23 @adidasFootball away shirt under the microscope 🔬#MUFC pic.twitter.com/OUcGLcdNKG

The two-tone black and red trim ensures that all three of the club’s famous core colours are visible at once, with the shoulder stripes also undergoing a multicolor reworking for the first time.

The distinctive collar and cuff trim is black with red and white diamonds woven into the thick banding while a “double helix” graphic is embedded within the white fabric — a very on-the-nose visual metaphor intended to represent the importance of United’s historic DNA.

🔴⚫️🔴 United through and through.

For the first time in our history, two-tone black and red three-stripe details feature across the shoulders of the shirt, as all three core club colours come together through the kit.#MUFC || @adidasFootball pic.twitter.com/EEEoGkL0vw

The three twisted strands visible within the helix weave also reflect the tri-pronged philosophy they have attempted to work and operate for the past 100 years: youth, courage, and success.

🧬 Tapping into our heritage.

A subtle helix pattern is engineered into the fabric of the shirt, drawing inspiration from the DNA and rich graphical identity of iconic United jerseys. #MUFC || @adidasFootball pic.twitter.com/bPwgaQG2GG

Obviously youth and courage have been a little easier to come by in recent years, but with Erik ten Hag at the helm a brave new dawn may just be on the cusp of breaking at Old Trafford as we head into the new season.

David Silva fined for hurting woman in brawl
S. America sees record crowd for women’s soccer
Under the ‘Scaloneta’, Argentina have a foundation for Messi and Co. to thrive at World Cup
Henderson added to England squad for NL games
Martinez unconcerned with Hazard’s lack of minutes