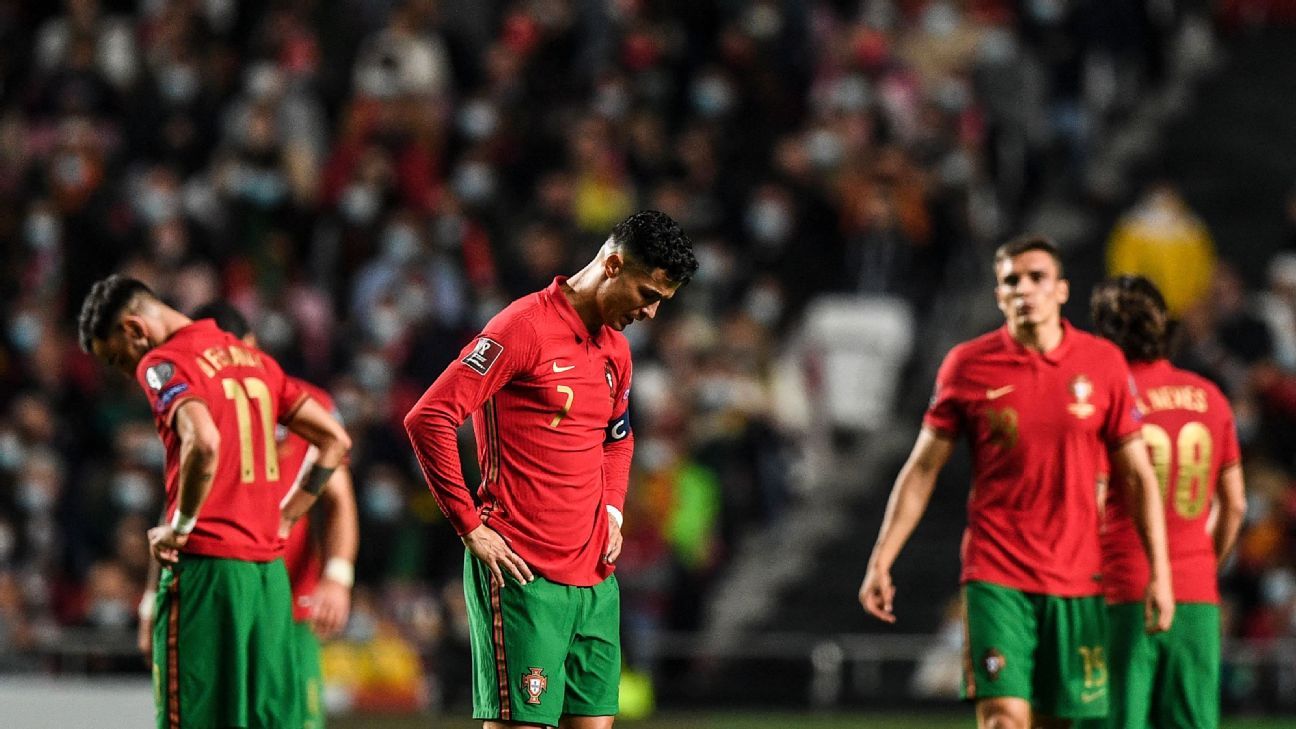 Whoever says the international break isn’t up to much clearly hasn’t been paying attention to the action over the past four days. In CONCACAF, the U.S. racked up a massive win over Mexico, but in Europe, there’s been A LOT to digest. Take the stunning struggles of Portugal, or the web of possible qualifiers out of Group G, where one of Norway, the Netherlands and Turkey will miss out. There was good news for Germany and Spain, too, but Harry Maguire might want to reconsider his goal celebrations should he ever score again for England.

It’s Monday, and Gab Marcotti reacts to the biggest moments in the world of football.

Jump to: Portugal, Ronaldo on the brink | Chaos for Norway, Turkey, the Dutch | Sane stands out | Tone-deaf Maguire | Stars align for Spain

A dramatic injury-time goal from Aleksandar Mitrovic gave Serbia a 2-1 win away to Portugal, condemning Fernando Santos’ side to the playoffs if they’re to book a spot at the 2022 World Cup. The game unfolded like one of those nightmares where you suspect it’s probably a dream and you want to wake up, but Freddie Krueger or his equivalent keeps coming after you. And then you realize it’s no nightmare; it’s all real.

Portugal only needed a draw to be sure of a place in Qatar, and they couldn’t have got off to a better start. Two minutes into the game, Bernardo Silva swiped the ball from Nemanja Gudelj, who teed up Renato Sanches to make it 1-0 to the home side. Serbia coach Dragan Stojkovic was furious, feeling Gudelj had been fouled, and was duly booked.

As a neutral, you felt it was going to be one of those nights where Portugal kept the ball, stroked it around and an already nervy Serbia would lose their cool. And, maybe, Portugal would add a couple goals on the break. Instead, Serbia got steely-eyed and proceeded with eerie efficiency in laying siege to Rui Patricio’s goal. They hit the woodwork, they forced Portugal further and further back, they were first to every ball.

Dusan Tadic levelled the score just after half an hour and still, Portugal didn’t seem to react. Sergej Milinkovic-Savic and Tadic, the Serbs’ creators in the middle of the park, found they had time and space, while the Portuguese counter was rarely effective. And at the very end, we got the sort of moment that will live in Serb footballing lore. Tadic’s far-post cross from deep found Mitrovic, who had come on at half-time, and he headed the winner past Rui Patricio.

You can focus on that moment and say Portugal should have done better, and you’d be right. Mitrovic was virtually unmarked and behind him, so was Sasa Lukic. But the fact is, the goal had been coming. Moments earlier, Mitrovic himself had come close to scoring. And, of course, back in March, when these teams faced off in Belgrade, Serbia had come back to draw 2-2 after going two goals down, so there were lessons to be learned.

It’s hard not to point fingers at Fernando Santos here. It’s fine to be a conservative manager and look to hit on the counter, picking your spots from set-pieces and seizing on opportunities He won a European Championship doing substantially that. But you also have to play a style that suits your talents so you can get your best players on the pitch, doing things that come naturally to them.

Portugal have a gaggle of attacking talent, from Diogo Jota to Bernardo Silva to Joao Felix to Bruno Fernandes (plus, of course, that Cristiano Ronaldo fella). The first two in particular are used to a high-energy pressing, front-foot-forward game at club level. Portugal’s fullbacks, Joao Cancelo and Nuno Mendes, are also very attacking. Why not play to those strengths? Especially if you line up with 36-year-old Ronaldo and Silva in your front three, neither of whom are particularly suited to making the sort of repeated sprints required in a counterattacking style.

As for Serbia, this is a team that is coming together nicely in time for the World Cup. They’re about due, too — this is only the second major tournament for which they’ve qualified in the past decade. The other was Russia 2018, and there’s still plenty of regret over that tournament and the late, late Xherdan Shaqiri goal that knocked out them in the group stage.

Blunders galore make for an exciting end to Group G

Louis Van Gaal found a way to keep up with Netherlands’ training after injuring his hip in a bicycle accident.

This comes after a weekend of missed opportunities. The Dutch were 2-0 up and cruising against Montenegro, when two goals in the last six minutes helped their opponents snatch a 2-2 draw. Norway will also rue their chance squandered, when their 0-0 draw against already eliminated Lativa at home is tantamount to two dropped points. Meanwhile, Turkey beat up Gibraltar, 6-0 to pull up alongside the Norwegians.

On Tuesday night in Rotterdam, the Dutch will host an Erling Haaland-less Norway. A draw will be enough for Louis Van Gaal’s crew to qualify, but a defeat — coupled with a Turkey win in Montenegro — would see them miss out altogether. After failing to qualify for Euro 2016 and the 2018 World Cup, that would be cruel indeed for Oranje fans…

With Germany already qualified for the World Cup and five players who either tested positive for COVID-19 or were forced into self-isolation, Hansi Flick used the trip to Armenia to try out some new(ish) solutions.

Jonas Hofmann, David Raum, Florian Neuhaus, Thilo Kehrer and Jonathan Tah all got a start in the 4-1 win, but perhaps the most encouraging sign for Germany fans was confirmation that Leroy Sane is playing some of the best football of his career.

The Bayern winger is a bit of an odd case. A bright spark at Schalke, he was dominant in his first two seasons at Manchester City before being slowed by inconsistent form and injury. That continued last season, his first at Bayern. Now, however, he’s at the top of his game, both on the ball (he’s unplayable at times) and off it (where his pressing movement and work rate have improved tremendously). He doesn’t turn 26 until January and after his “lost seasons,” he could be on his way back to where many of us thought he would be: as one of the best wingers in the world.

Maguire fails to read the room with his goal celebration

When it comes to England’s 5-0 win over Albania on Friday night, the focus really ought to be on how Gareth Southgate’s crew — barring some epic cataclysm on Monday night — has qualified for the World Cup and how Harry Kane scored a hat-trick.

Kane now has scored as many goals for England this season as he has for Spurs in the Premier League and Europa Conference League combined. He now has 44 goals in 66 international appearances and, at 28 years of age, looks a safe bet to eclipse Wayne Rooney’s England record of 53. (That said, football can be cruel: Rooney was just a year older than Kane is now when he got to 44.)

– Olley: Kane’s hat-trick a timely reminder of what he can do

But it was Harry Maguire’s ear-heavy celebration — first cupped, then with fingers stuck in them — that drew the headlines. It came after the opening goal and drew criticism from pundits and ex-pros on TV to the point that Maguire had to explain himself on Sunday. “It wasn’t directed at anyone, it was a knee slide,” he said. “I put my hands on my ears, but I’m Manchester United captain. Of course I’m going to get criticism when the team isn’t doing well, I fully expect that. But, of course, it wasn’t directed at anyone.”

Roy Keane, a fellow United captain, called it “embarrassing.” He may be a bit over the top, but Maguire is distinctly tone-deaf. That sort of celebration has meaning.It’s what you do when you’ve been playing badly and getting booed and then score. England fans haven’t been booing Maguire; United fans have, and the vast majority of them don’t care that he just scored the opener in a de facto meaningless qualifier against Albania. They probably will, however, if he and his team perform next weekend away to Watford.

Sometimes, it’s best to just read the room and remember who you are.

It’s easy to forget just how rough things looked on paper for Spain and Luis Enrique a week ago. Already viewed with a fair bit of mistrust by the public — despite Spain’s run to the semifinals of Euro 2020 — for some of his selection decisions and his team’s retro tiki-taka tendencies (tons of possession, few goals) despite missing a bunch of regulars (Marcos Llorente, Pedri, Ansu Fati, Mikel Oyarzabal), the table wasn’t in his favour either.

Heading into the international break, Spain sat two points behind Sweden with two games to go. The two would meet Sunday night in Seville. Before that, La Roja were facing a trip to Greece — who may not be much to write home right now, but had held him to a 1-1 draw in Spain at the start of qualifying — while Sweden, strengthened by the return of Zlatan Ibrahimovic, traveled to face Georgia, a relative gimme on paper.

Well, on Thursday night, Spain squeezed out a 1-0 win in Athens, while Sweden crashed to a 2-0 defeat in Tbilisi. Had the Swedes won, the Seville match might have been a wholly different proposition because a draw would have been sufficient for them to advance. Instead, they needed a win, and they made Spain suffer for long stretches, coming close with Emil Forsberg and Alexander Isak, while the home side controlled the game, creating chances, but failing to muster even a single shot on target until late.

Luis Enrique’s decision to send on Alvaro Morata (aka “Mister Much Maligned”) at the hour mark, rather than trying to shepherd the game towards a draw, was vindicated. He offered the running in behind the defense that kept Sweden off balance and, with four minutes to go, he scored the goal that definitively sent Spain to the World Cup.

Morata may not be a model of consistency and yes, he does look like less than the sum of his parts on many occasions, for both club and country. (They’re quality parts, too: strength, speed, technical ability, movement.) But if Luis Enrique can make it work, he could be the striker Spain need to win the World Cup.