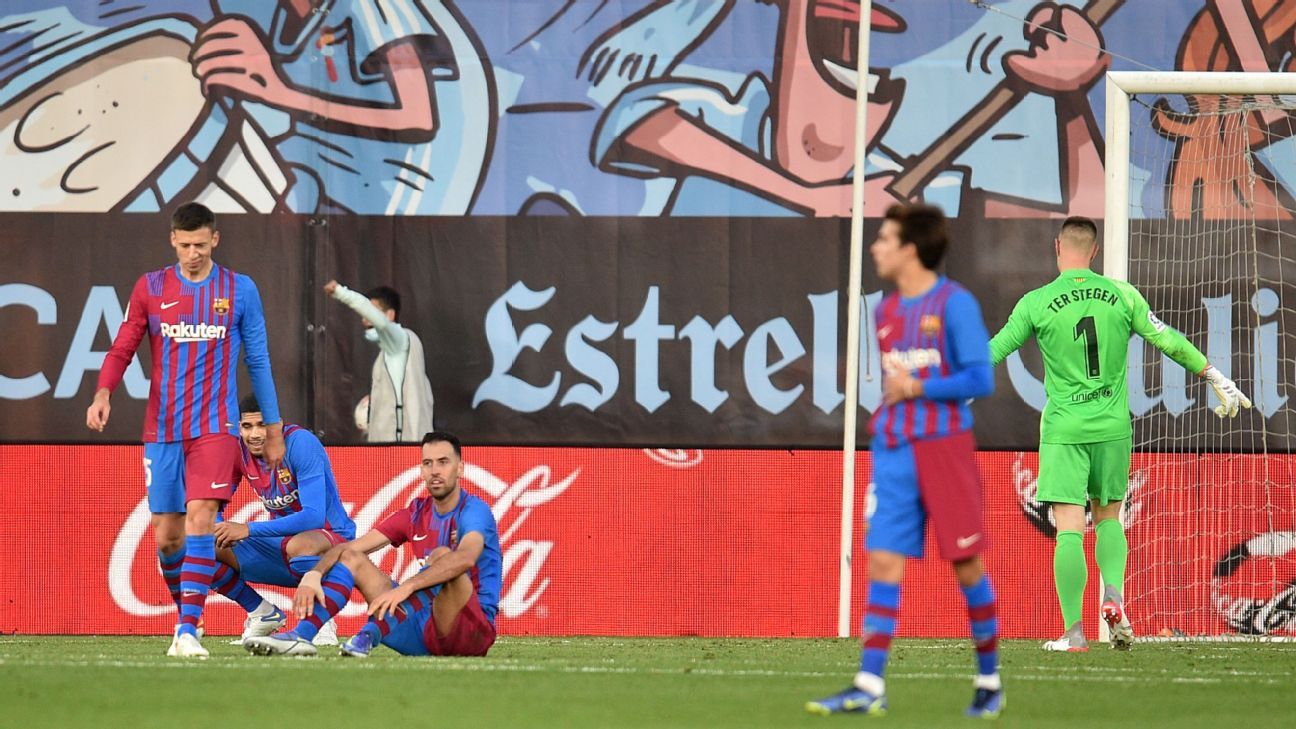 Another busy weekend laid bare the issues faced by Barcelona, Manchester United and Juventus, while Real Madrid turned on the style, Liverpool lost for the first time, Roma slumped to another defeat and Neymar inspired Paris Saint-Germain.

Here are James Olley, Alex Kirkland and Andrew Cesare Richardson with what you need to know from around Europe.

With club legend Xavi Hernandez poised to fulfill his destiny and take charge of the first team, Barcelona went to half-time at Celta Vigo boasting a 3-0 lead, with young star Ansu Fati on the scoresheet again. Things were finally starting to look up.

By the full-time whistle at Balaidos, much of that optimism and excitement had dissipated. Not only had Celta hit back for a LaLiga point — Iago Aspas scored a 96th-minute equaliser in a thrilling game — but Fati had pulled up with a hamstring problem, while Nico Gonzalez and Eric Garcia had also joined an 11-man injury list.

Barca have gifted players capable of brilliance and youngsters ready to step up and become mainstays, but they are flawed from back to front. What has happened to goalkeeper Marc-Andre ter Stegen? Will Clement Lenglet ever stop being a soft touch? Does Oscar Mingueza have any future at right-back? And how do you play 4-3-3 when your wingers are perennially injured?

Xavi is more aware than anyone of the size of job he faces, but this game was a useful summary of the good, the bad and the ugly. — Kirkland

Solskjaer survives as others fall

Two Premier League managers lost their jobs at the weekend, yet Ole Gunnar Solskjaer continues to cling on at Manchester United, whose season is drifting in hopes the struggling manager can somehow turn things around.

It looks forlorn, particularly given the embarrassing ease with which Manchester City won Saturday’s derby at Old Trafford. The game was, in some senses, worse for United than the recent 5-0 defeat to Liverpool, given how Pep Guardiola’s men were able to keep the ball and conserve energy for tougher challenges.

Meanwhile, Norwich beat Brentford to claim their first Premier League win of the season, but nevertheless parted company with Daniel Farke. And five consecutive defeats were enough to convince Aston Villa that Dean Smith has taken them as far as he could.

For better or worse, both decisions were made in a bid to salvage the clubs’ respective campaigns. Norwich and Villa have different aspirations, but their ruthlessness only brings United’s leniency into sharper focus. — Olley

Steve Nicol says Manchester United are nowhere near the level of their rivals as Manchester City cruise to victory.

Jesse Marsch did something Julian Nagelsmann never achieved on Saturday: He led RB Leipzig to a win against Borussia Dortmund, as Christopher Nkunku continued his impressive start to the campaign with a goal and an assist in a 2-1 victory.

It has been a difficult first season for Marsch — a midweek draw against PSG ended Leipzig’s Champions League hopes with two group matches still to play — but right from kickoff, they were fresher and more determined than Dortmund.

Nkunku kept his cool to open the scoring on 29 minutes after sneaking in behind Manuel Akanji and goalkeeper Gregor Kobel. After Marco Reus equalised for the visitors, Nkunku set up Yussuf Poulsen to net a deserved winner that helps Leipzig’s Bundesliga top-four hopes and boosts their American coach. — Richardson

Steve Nicol says Jesse Marsch still has work to do to prove he can win the biggest games with RB Leipzig.

Juventus win, but still do not convince

Juventus halted a run of defeats, but theirs was a seriously unconvincing victory over rivals Fiorentina that was achieved only via a stoppage-time winner from Juan Cuadrado after the visitors had Nikola Milenkovic sent off with 17 minutes remaining.

It was the kind of victory that Max Allegri’s dominant side was known for during his first spell at the Allianz Stadium, but this Juve got lucky rather than knowing how to win ugly. The Old Lady offered nothing prior to the sending off and were lucky when Fiorentina had a strong penalty claim waved away just before half-time.

Daniele Rugani, deemed not good enough for Rennes during a loan spell last season, started in central defence and Adrien Rabiot was on the left wing, which smacks of a manager unsure of his strongest XI. Juve are 14 points behind leaders Napoli and AC Milan; never mind winning Serie A, they are fighting to qualify for the Champions League. — Richardson

Real Madrid have scored some lovely team goals this season and their first against Rayo Vallecano was no exception: Eder Militao’s pass upfield was flicked on by Toni Kroos for Vinicius Junior, who carried the ball forward and laid it off for Marco Asensio to pull back and enable Kroos to apply a sweeping finish.

An offside flag detracted from the immediate moment, but VAR soon put that right and Madrid could celebrate. A second-half move involving backheels from Vinicius and Ferland Mendy could have led to an even better goal, if only Karim Benzema had not curled his shot just over the crossbar. — Kirkland

Liverpool were beaten at West Ham to lose the Premier League’s last unbeaten record, but Trent Alexander-Arnold provided the game’s standout moment with a sublime free kick just before half-time, which showed such remarkable precision that West Ham goalkeeper Lukasz Fabianski could only watch in admiration.

Six of Trent Alexander-Arnold’s nine Premier League goals have been from outside the box and this was another reminder of his superb technique. It was also timely ahead of the international break, given the 23-year-old is yet to convince England manager Gareth Southgate and his right-back rivals, Kyle Walker and Reece James, excelled a day earlier. — Olley

OH MY LIVERPOOL. We are LEVEL at the London Stadium! #MyPLMorning

After leaving AC Milan on a free transfer in the summer to join cross-town rivals Inter, Hakan Calhanoglu added to his chapter in Derby della Madonnina lore on Sunday by becoming the fourth player in the past 25 years — after Hernan Crespo, Ronaldo and Zlatan Ibrahimovic — to score in the first Milan derby after switching clubs.

The Turkey international won a controversial penalty after eight minutes, following a tangle with former teammate Franck Kessie, and after a three-minute VAR review, coolly slotted past goalkeeper Ciprian Tatarusanu to open the scoring and silence the booing crowd. Milan later levelled and the game ended 1-1, but their former hero had made his mark. — Richardson

Hakan Çalhanoğlu steps up and scores from the spot against his former club 👀 pic.twitter.com/UAlfm81ET9

Two teams that should be worried

After a bright start, Roma’s form under Jose Mourinho has dropped alarmingly, with the latest lapse seeing them blow a lead to lose at Venezia — the promoted club scored more than once at home for the first time this season — and condemn the Giallorossi to a fifth defeat in nine league games.

Mourinho’s tenure began with three successive wins and nine goals, but form has nosedived; key games at arch-rivals Lazio and Juventus were lost, while there was also a first-ever Serie A home defeat for the Portuguese, and a humiliating 6-1 loss to Norwegian side Bodo/Glimt in the Conference League.

Simply qualifying for the Champions League would be a success following recent failures for Roma, but they are losing ground. Mourinho has yet to register a win against one of the league’s bigger clubs and is running out of excuses; the question now is whether he can halt the ongoing slide. — Richardson

A change of coach — Javier Pereira replacing Paco Lopez — has not sparked a revival at Levante, who are rock bottom of LaLiga amid a 21-game run without a victory, the latest of which was a 2-1 reverse against fellow strugglers Alaves.

When Jorge de Frutos opened the scoring after 13 minutes, Levante had hope that an elusive first win was around the corner. However, two late strikes from Alaves forward Joselu, whose goals have been one of the surprises of the Spanish season, put that notion to bed.

It is still relatively early days, but with six points from 13 games and already five points adrift of safety, Levante look favourites for the drop. — Kirkland

Julien Laurens breaks down PSG’s 3-2 win over Bordeaux, which puts them 10 points clear in Ligue 1.

As Paris Saint-Germain won at Bordeaux to sit 10 points clear of Lens after just 13 games of the Ligue 1 campaign, Neymar scored twice in a game for the first time since Jan. 31 to help cover for the sidelined Lionel Messi.

With Kylian Mbappe chipping in a goal and two assists, Neymar scored the 400th and 401st goals of his professional career with finishes of high quality; the first whipped inside the near post from 12 yards and the second was an expertly controlled first-time strike from his teammate’s clever flick.

Neymar brought added poignancy to his performance by unveiling a T-shirt in dedication to Brazilian singer Marilia Mendonca, who died in a plane crash on Friday, which read: “I will be your fan forever, queen of suffering. RIP MM.” — Olley