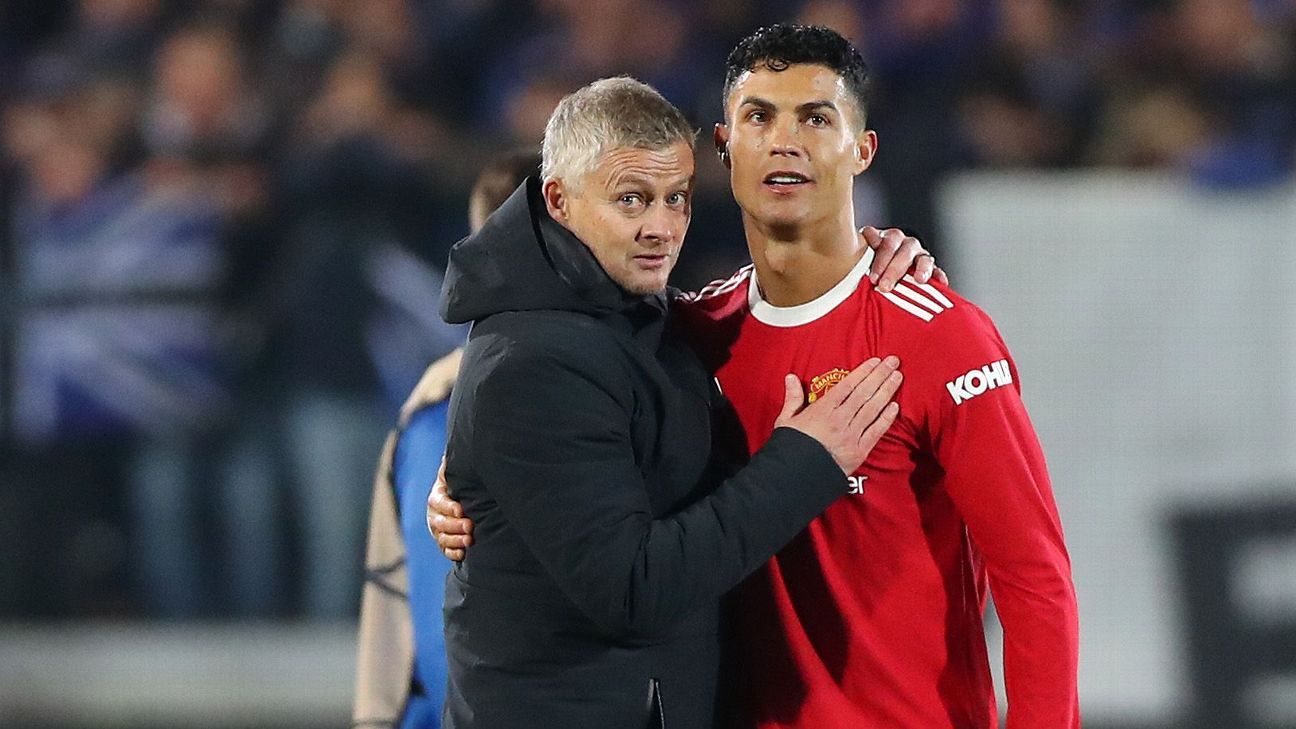 BERGAMO — Cristiano Ronaldo did not return to Manchester United earlier this season to keep Ole Gunnar Solskjaer in a job, but he is doing it almost single-handedly right now.

Another hapless United display was glossed over by another Ronaldo rescue act with two goals in a 2-2 draw against Atalanta in Bergamo, but Solskjaer’s post-match smile will have masked an acceptance that he will have to save himself sooner rather than later.

Ronaldo, the oldest man in the United team, scored crucial equalisers in stoppage time at the end of each half to keep Solskjaer’s side on top of Champions League Group F. A win against Villarreal in Spain later this month will confirm United’s place in the Round of 16 and do wonders for the manager’s job security.

Even Ronaldo admitted that United were lucky, with the forward saying, “We were a little bit lucky in the end but that is football.

“We have to still improve, we have different players, different system, we have to adapt with each other, but it will take time. we have time to improve and be better.”

This was the third successive Champions League game in which Ronaldo has made a decisive late intervention, with winners at home to Villarreal and Atalanta before his 92nd minute volley in the Stadio di Bergamo.

Add them up and his goals have been worth five points in Group F alone. His contribution in the Premier League has also been significant, with four goals in seven appearances. Yes, he has created a tactical problem for Solskjaer because of what he can no longer do, but any suggestion that Ronaldo has been detrimental to the team only needs to look at his match-winners and, against Atalanta, his match-saver.

But no top team, or top manager for that matter, can allow their hopes and prospects to be carried by just one player. For now at least, United can just count themselves lucky that Ronaldo is still able to perform like Superman when everyone else plays like they have been told to go out onto the pitch and work it out for themselves by the manager.

And that is where United appear to be right now. Saturday’s 3-0 win at Tottenham lifted the intense pressure on Solskjaer in the wake of the 5-0 defeat against Liverpool a week earlier, but it would naive and foolish to believe that result had steadied the ship and rendered the Liverpool loss as nothing more than a blip.

In Bergamo, United were all at sea again for much of the game. Defensively, they were chaotic again, both before Raphael Varane‘s first-half injury and after. United started as a back five, after the successful tactical switch at Spurs, but they still fell behind for the eighth time in 15 games when Aaron Wan-Bissaka was caught between attackers on 12 minutes and allowed Duvan Zapata time and space to beat him to the ball and pass to Josip Ilicic, who beat David de Gea from 12 yards to make it 1-0.

Wan-Bissaka and Eric Bailly played like strangers, leaving gaps on the right, but Bailly at least redeemed himself with a series of crucial defensive blocks.

Harry Maguire, meanwhile, was constantly beaten for pace and movement by Zapata and Mario Pasalic and, when United reverted to a back four after Varane limped off on 38 minutes, the defence continued to look shambolic.

Ronaldo’s first equaliser, a minute into first-half stoppage time, when he scored after a back-heel by Bruno Fernandes gave United a foothold in the game, but the second-half produced another display of the chaotic nature of Solskjaer’s team.

Zapata and Pasalic continued to cause major problems and Zapata restored Atalanta’s lead on 57 minutes after embarrassing both Bailly and Maguire.

Ronaldo has been CLUTCH this season 😤

So United were chasing another game, at panic stations once again — it’s one of the recurring fault-lines of Solskjaer’s team.

There is no control to their play and no sense of a workable plan. It is simply a case of playing at 100mph, hoping for a breakaway and then rinse and repeat if it doesn’t work the first time.

Watch Liverpool or Manchester City and see how they patiently control games by moving the ball around midfield, dictating the tempo and probing the opposition before finding a way through.

That’s what the top teams do, but United have no control of midfield whatsoever. Paul Pogba, restored to the team by Solskjaer having been dropped by him prior to his red card against Liverpool, lost the ball repeatedly rather than control it. The France midfielder is supposed to be one of the world’s best players, but he is careless in possession and lacking in desire to win the ball back.

All of the above can be pinned on Solskjaer. As manager, he has to have a tactical approach that gets the best from his players and constructs a reliable defence and midfield.

But the former Cardiff and Molde coach, almost three years into his job at United, has still to show he can do that most basic of tasks.

Eventually, Solskjaer will have to crack that code because at this level of the game, you cannot get away with it forever.

But while he has Ronaldo fit and in form, Solskjaer might continue to get lucky. Or lucky enough for his Old Trafford bosses to avoid the issues that are so blatantly evident to everyone else.