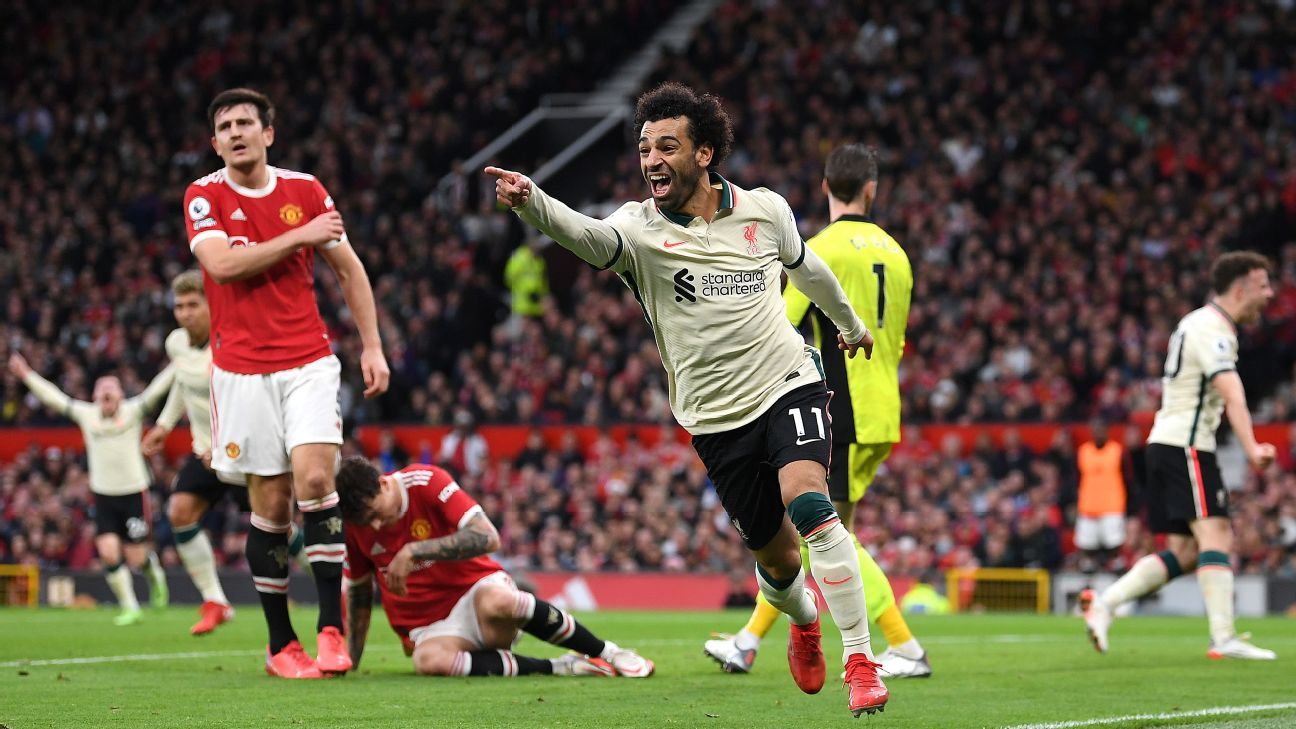 Early last week saw the football cycle dominated by Mohamed Salah‘s contract and news that his advisor, Ramy Abbas Issa, was looking for a hefty bump to his client’s wages. Given his contract expires in 2023 — which means that he can sign with anyone as a free agent in 14 months’ time — and given the fact that Salah’s own boss, Jurgen Klopp, suggested he was the best player in the world (“Who is better than him?”) following his remarkable hat-trick in Liverpool’s 5-0 win at Manchester United, you would imagine Salah is in a pretty strong position.

He’s playing some of the best football of his career (15 goals in 12 appearances this season tell their own story) and his situation is a fascinating one, mixing elements of age, longevity, opportunity-cost, the global pandemic, macroeconomics and a perhaps unprecedented contractual and demographic cliff edge — Salah’s fellow forwards Sadio Mane and Roberto Fimino are the same age and also go out of contract in 2023 — that looks distinctly counter-intuitive. Played correctly, this might even work in Liverpool‘s favor.

Let’s start with the obvious, which is also the unsurprising takeaway of this column (in case you’re in a rush): Liverpool should extend Salah’s contract, but not at any price and not under every circumstance. So let’s look at the factors Liverpool are likely to be considering.

First, there’s age and longevity. Salah will have just turned 31 when his existing deal expires. You would assume he’d be looking for a three-year deal (at least), and then the argument becomes whether Liverpool believe he can provide a level of performance through the eve of his 34th birthday to justify a substantial increase in salary. Remember, when giving out contracts, you don’t pay for what somebody has achieved; you pay for what you think they will offer.

The biggest concerns once players pass 30 are injuries and loss of production. Catastrophic impact injuries can strike at any time, of course, but a player’s past durability can be a pretty good indicator that he recovers quickly from niggling injuries and takes good care of himself. Since 2015, Salah has appeared in 219 of 237 league matches for Roma and Liverpool.

As for loss of form, yeah — age is undefeated, particularly for hard-running wide forwards. Cristiano Ronaldo and Lionel Messi are outliers in every way, so put their post-30th achievements to one side. Beyond that, the list of wide forwards aged 32 or over-performing at a high level is, objectively, limited. Transfermarkt’s Top 5, after Lionel Messi, includes Angel Di Maria, Dusan Tadic, Gareth Bale and Willian. It’s hard to see any of these guys getting into the current Liverpool team.

There is a caveat. While the list of top wingers age 32 or older is very limited, there has been a bit of a paradigm shift for more central attackers. Robert Lewandowski (33), Thomas Mueller (32), Karim Benzema (33), Iago Aspas (34), Jamie Vardy (34), Dries Mertens (34) and others have all been productive well into their 30s. Given his technical ability, which he won’t lose, could he reinvent himself more centrally? Possibly, though obviously that would mean Klopp making a significant tactical adjustment.

(We should add here that, in making their decision, Liverpool have far more knowledge than we do because they have sports scientists with access to his medical records and real-time fitness metrics. It doesn’t make them infallible, but it those give them better data points.)

Then there’s bargaining power and opportunity-cost. The Football Finance blogger Swiss Ramble offers an excellent account of where Liverpool are financially. The bottom line is that, as Klopp put it, “we’re allowed to spend what we earn.” They do not have an ownership group willing to bankroll losses or take on additional debt. They have to be smart, because resources are limited and every decision has an opportunity cost.

Over the past year or so, Liverpool embarked on a strategy of renewing their stars’ contracts. Salah, Mane and Firmino have yet to extend, but Alisson, Trent Alexander-Arnold, Virgil Van Dijk, Fabinho and Jordan Henderson all put pen to paper on long-term deals by the end of the summer.

The first three, in some ways, were no-brainers: Alexander-Arnold (23) is a young local star, Alisson is young (29) in goalkeeping years, Van Dijk was coming off an injury. But Fabinho and Henderson are 28 and 31 respectively, and both had deals that expired in 2023. Like the three forwards, if you were going to cash in and replace them with a cheaper, younger player with long-term upside, the time to do it was last summer. Except, of course, there’s more to running the club than the “moneyball playbook” — you also want to win things (and, commercially, strengthen your brand).

Liverpool have a window of opportunity with a core of players that work well together and a beloved manager locked into a contract through 2024. So the only stalwart “sacrificed” to the numbers was Georginio Wijnaldum, whose deal was not extended and who left as a free agent. It’s entirely possible that in a different economic environment, they might have sacrificed one of their forwards, too.

Conventional wisdom might have suggested cashing in on, say, Salah or Mane over the summer for a substantial offer, say £60m or maybe more. You already had a viable starter in Diogo Jota to complete your front trio, and you could have used the savings on Salah’s contract to lock in the other two. Oh, and with the proceeds of the sale, you could have picked up a young forward who you think might develop. That didn’t happen, because the coronavirus pandemic bit hard. Only three players changed clubs for transfer fees over £50m last summer, and they moved to Manchester City, Chelsea and Manchester United respectively: even assuming they were interested in Salah or Mane, Liverpool weren’t going to sell to them.

And so they’re left with Salah and the other two, still unsigned. The option of selling Salah remains, but at this stage, it’s less attractive. With a year left on his contract, he’s likely to command a smaller fee, and there are very few clubs who tick all three boxes required for a Salah sale: being able to pay a fee Liverpool would accept, being able to pay Salah what he wants and being a club he’d want to join.

The good news is that the above works both ways. Just as it’s difficult to let Salah join another club with a year remaining on his deal, it’s difficult for Salah to find a better deal elsewhere. Despite Salah being a great player, between COVID-19 aftershocks and an already polarized market, the number of interested parties is likely to be limited.

Barcelona and Juventus suffered huge losses. Real Madrid are fixated on Kylian Mbappe, who will be a free agent in 2022. (With Vinicius and Eden Hazard still at the Bernabeu, it’s also hard to see them adding a fourth high-priced wide player.) Bayern already have a gaggle of wide forwards. Paris Saint-Germain is possibly the only viable option, assuming Mbappe leaves and Financial Fair Play is still on holiday. It’s hard to see Salah leaving for an English club, but of those who could afford him, City and United have plenty of wide players whereas Chelsea don’t really play with wingers.

Sure, things could be different in 2023 when Salah becomes a free agent, but they likely won’t be next summer. And while it’s possible 2023 could turn in Salah’s favour, with the continent’s heavy hitters lining up to out-bid each other, it’s also possible the climate could turn against him, either through injury or loss of form.

In that context, the appeal of staying at Liverpool, even with a modest raise and hefty bonus structure, has got to be strong. And you can see why the club feels they have leverage.

So what should Liverpool do?

You can also think of it in terms of “worst-case” scenario. If Liverpool don’t extend Salah and he leaves as a free agent, they get another 18 months of him at his present salary (which is value for money). Sure, they’ll then need to find a replacement. Say it’s a £60m player who gets a five-year deal at £8m per year: total package £100m. Clubs calculate the cost of the player by spreading the transfer fee over the life of the contract and adding his annual wages. That would mean £20m a season, which likely isn’t much more than what it would cost to extend Salah now. It would also mean they’d have freed up enough money to extend Firmino and/or Mane’s contracts. They’re important players, too.

What’s the worst-case scenario if they extend Salah for, say, another three years and, say, double his salary? He ends up not performing, either through injury or age, and they still have to find a replacement. And on top of that, because they’re increasing his wages significantly, they fail to extend Mane and/or Firmino. Or they overpay for them and then have to replace all three in one go, while also not strengthening other areas of the pitch where they might be a bit thin.

Finally, there’s an emotional component. Salah is comfortable at Liverpool with Klopp. Go elsewhere, and there are no guarantees. He’s not a robot, he’s settled and happy at a club with a massive fan base that adores him and gives him visibility, as well as a platform that will serve him well post-football. There’s no real footballing reason to leave right now, as far as we can tell.

Could it change if he says something like “I’ll always love Liverpool but I always dreamt of playing for Real Madrid/alongside Lionel Messi and Neymar in Paris” or whatever?” Sure, but we’re not there yet. And Liverpool can be cautiously confident it won’t get to that point.