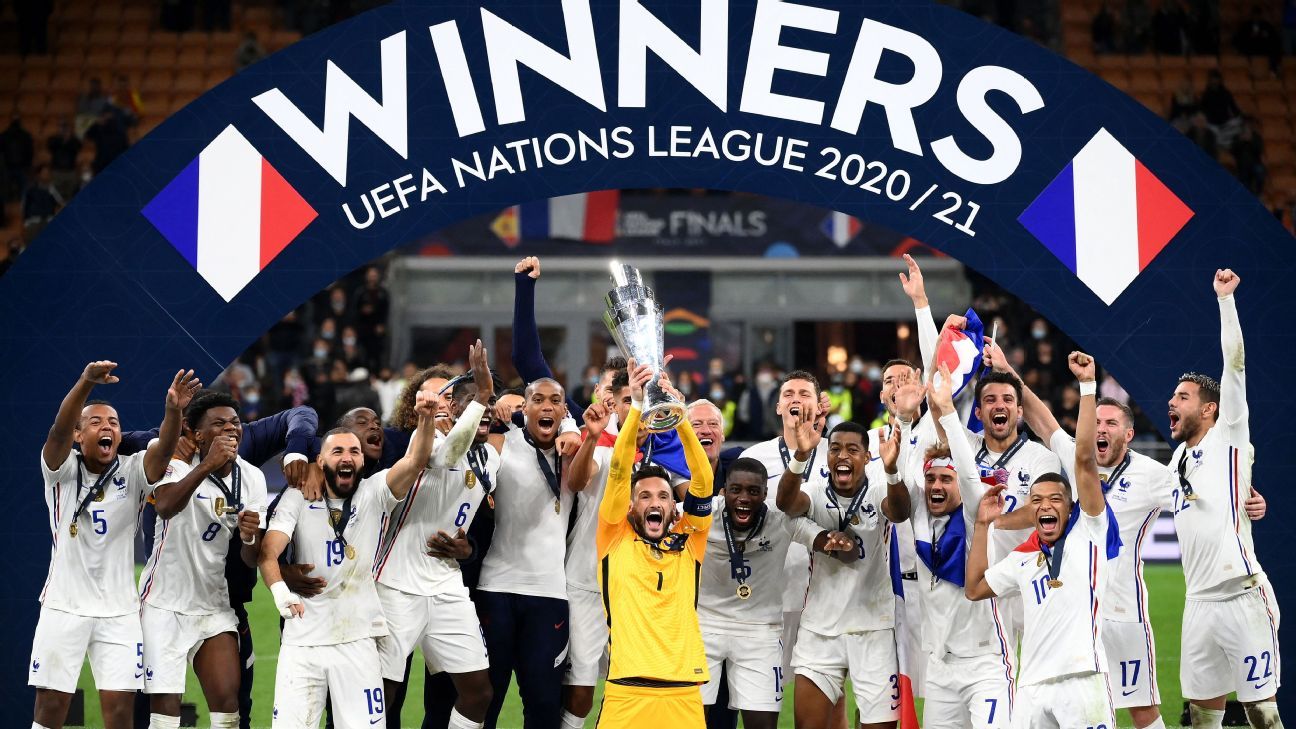 On Sunday, after Spain lost to the country of his birth in the Nations League final — he was born in Agen, in the south of France, but has Basque great-grandparents — Aymeric Laporte couldn’t mask his frustration. “It’s a tough loss to take because we played better than them…”

Three years earlier, it was Thibaut Courtois playing the role of Laporte. Back in 2018 at the World Cup in Russia, the Belgium goalkeeper didn’t hide his frustration after losing 1-0 to France in the semifinal. “They were not better than us. They just defended with 11 men behind the ball and play on the counter. Our strength is to play football, theirs is to defend.”

That’s what Didier Deschamps and France do to you. You can have the ball — 66% possession for Spain in Sunday’s Nations League final, 63% for Belgium in the 2018 semifinal — you can have the movement and you will generate some decent chances, but they will absorb the pressure, control the defensive spaces, play quick attacking transitions and win.

Other examples? In 2016, in the Euros semifinal in Marseille against Germany, they won that way too, enjoying just 32% of the ball. In the 2018 World Cup final against Croatia, it was the same story: France had the ball 36% of the time and let Luka Modric & Co. feel like they were in control, before taking over and winning 4-2.

It is not a style of football that suits everyone’s taste and even Paul Pogba said after winning Thursday’s Nations League that Les Bleus have to do better. Once again against Spain on Sunday, they fell behind and once again, they had to be reactive instead of proactive.

“We won because we reacted. We didn’t start the game well again and we have to do better — we know it. But if that’s the way to win, we will continue like this,” the Manchester United midfielder told French TV, with a big smile on his face. Benzema, who obviously wasn’t part of the squad that won the World Cup in 2018, hailed the “character” of the team and the “never give up attitude.”

The bigger picture is clearer, though. When you are struggling for form, go back to basics. When you’re not winning like you used to, go back to what you know best. That’s exactly what the reigning World Cup holders did. This was a huge week for them to get back on the right path and make a statement 14 months before the World Cup, and they did just that in the Nations League. Racking up impressive wins against Belgium and Spain in the space of three days, each time after conceding first, were vintage France 2018 and vintage Deschamps. Even the new formation — a 3-4-1-2 compared to the flat 4-4-2 in 2018, which had Blaise Matuidi as the left-sided midfielder — makes them more like the team that won in 2018.

At the Euros this summer, the French head coach tried to change a few things, partly due to the return of Karim Benzema after a five-year exile. They tried to be more attractive and play more attacking football; Deschamps also chose to take a step back in his management and let the dressing room manage itself more. It was a gamble, but it didn’t work.

The DNA of this team is built upon the pragmatism and discipline of its manager; the magic of their world class players does the rest. Benzema, Pogba, Kylian Mbappe and, to a lesser degree, Hugo Lloris, made the difference again to win this competition. Mbappe in particular had a point to prove, and there was also a chip on his shoulder after his comments earlier last week. He was amazing against Belgium, and decisive with the winning goal in the final that was reminiscent of the Brazilian Ronaldo at his peak.

As for Benzema? He contributed two great goals, especially the one against Spain, and two special performances overall. Pogba? His second half against Belgium was one of the best of his international career, with his leadership and work rate against Spain helping set the platform for success; Lloris also made key saves. Add some of the new generation like Jules Kounde, Theo Hernandez (one goal and one assist in two games), Aurelien Tchouameni, all of whom showed so much promise, and it appears that France have rewritten their recipe for success. Like Deschamps says to his players all the time: “the best vitamin is to win matches.”

Could another manager make them play better? Surely yes. Would they win as much? It’s impossible to tell, yet it’s hard to argue with the overall results, as no team in the world has arguably been as successful as France in the past seven years.

France’s progress through the Nations League was not perfect, of course — it never is with France, nor will it ever be. Belgium dominated them in the first 45 minutes of their semifinal. Spain put them under pressure by moving the ball well in the final. Yet, in the end, Les Bleus are winners again. Big winners. They become the first country ever to win the World Cup, the Euros and the Nations League; make of that what you wish.

The even better news for France is that the team and the manager have found their identity again, which is really bad news for everyone else.