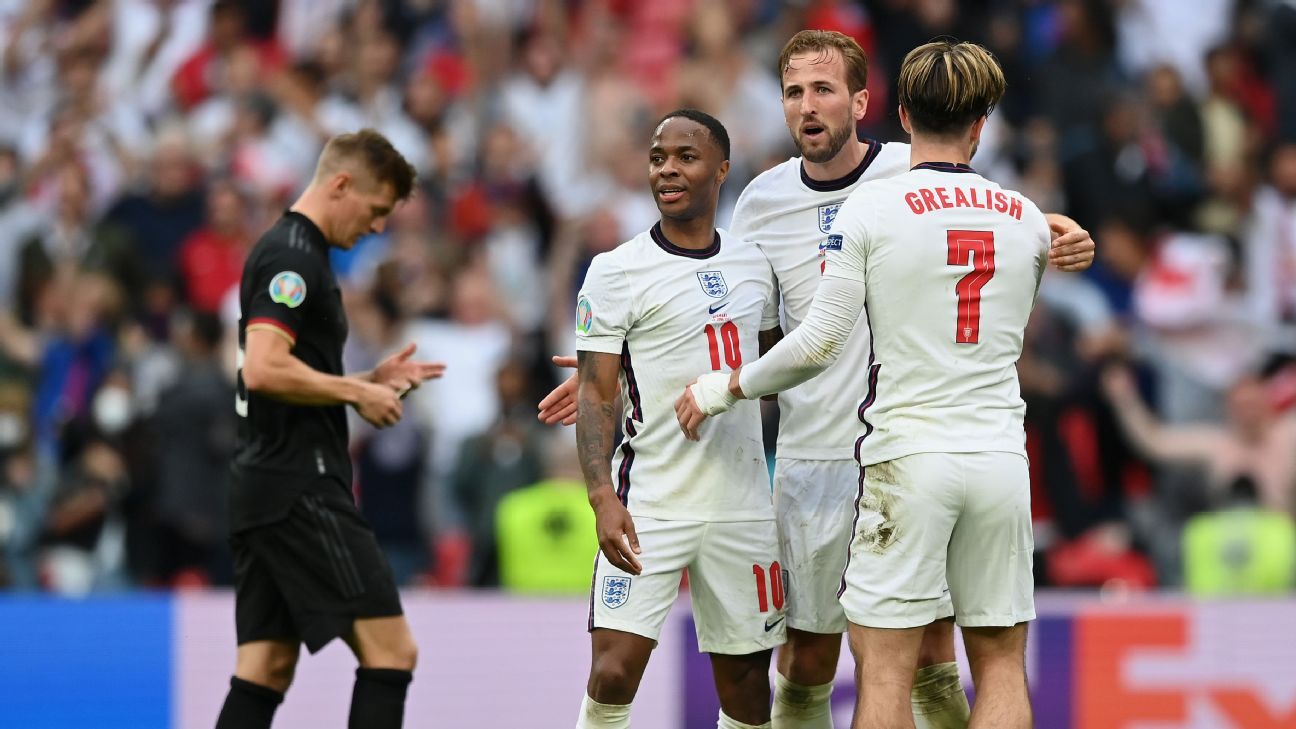 International breaks are fraught with risk as clubs are left praying their players return without injury, but given how Gareth Southgate is shaping his England team, any concern for Tottenham Hotspur over Harry Kane might be more psychological than physical.

Spurs did everything possible to prevent Kane from joining Manchester City this summer after the 28-year-old asked to leave, but he’s likely to get another reminder of what he is missing out on when England face Andorra and Hungary in two World Cup qualifiers over the next five days. Southgate is likely to continue with a degree of rotation, mindful of the individual load on players at this time of year — thinking that led him to leave out youngsters Jude Bellingham and Mason Greenwood altogether — but a hierarchy within the rich array of attacking players at his disposal is beginning to emerge.

Kane’s status as captain, his proven pedigree and a lack of a credible alternative up front all make him more impervious than most to the vagaries of form.

Despite a slow start to the season, Kane scored in all three of England’s September fixtures, taking his tally to 41 goals in 64 caps. It will be a matter of when, and not if, he breaks England’s all-time goal-scoring record, held by Wayne Rooney (53 goals from 119 caps). He remains the leader and talisman of a young group and Southgate highly values the professionalism and high standards he exemplifies, even if that well-earned reputation was compromised somewhat as he agitated to leave Spurs when chairman Daniel Levy was working overtime to keep his captain in north London.

Sources have told ESPN that City never tested Levy’s resolve with an offer anywhere close to his £150 million valuation of Kane, a robust stance made more impenetrable by the knowledge that the striker had three years remaining on his £200,000-a-week deal. But the hope that this awkward chapter is now closed has dissipated thanks to Kane’s underwhelming start to the campaign, perhaps as he struggles to rediscover his motivation and purpose; for example, he is still waiting for a first Premier League goal of the season.

The sight of City playing at such a high level against Chelsea, Paris Saint-Germain and Liverpool in the past week, yet palpably missing a striker to more efficiently translate their superiority to the scorelines, must also rankle.

A change of scenery might do him good, but at the same time, Southgate appears to be settling on a favoured front three that would have had a chance to develop further under Pep Guardiola at City had things worked out differently. Things can change quickly. Marcus Rashford will soon return from shoulder surgery, Jadon Sancho will surely improve after an underwhelming start to life at Manchester United, Bukayo Saka is growing in his influence at Arsenal while Phil Foden‘s excellent form at Manchester City makes his case a compelling one. But Jack Grealish and Raheem Sterling are Southgate’s preferred choice to operate in the wide positions either side of Kane.

Grealish’s £100m move from Aston Villa to City only increased the clamour for Southgate to find a place in his starting lineup for the playmaker who’d been largely restricted to the role of impact substitute. Although there remains a debate as to whether England line up in a 4-2-3-1, a 4-3-3 or revert to the three-man defence that has been used to great effect in tournament football, Southgate finally appears convinced Grealish’s precocious talent can be incorporated without sacrificing defensive balance.

Sources have told ESPN that one of the reasons Grealish has had to earn Southgate’s trust hinges on the attacker’s mixed response to being asked to press more than he did at Aston Villa. Guardiola’s approach is predicated on such a demand from his attacking players; Grealish’s move to City should only make him more appealing to Southgate.

Grealish has yet to score for England in 15 appearances, but Southgate notably described him as “physically definitely in a better place” when discussing the 26-year-old at his squad announcement last week.

Yet his arrival at City has put Sterling’s future at the club in doubt. Sources have told ESPN that Sterling was one of the names briefly suggested as a possible makeweight in a deal to sign Kane, but the player himself had no intention of leaving the Premier League champions. The 26-year-old has started just two Premier League games this season while Grealish was included in all seven, taking over Sterling’s most common position for City on the left and fueling speculation that Barcelona could offer him a way out in January.

Regardless, Sterling remains a pivotal player for Southgate, adept at playing on the right, and he was a standout performer at Euro 2020 with his pace absolutely vital in linking a safety-first central midfield with Kane. Sterling’s end product has often been criticised, but he has 16 goals from his past 25 England games, and with 17 goal involvements from his past 13 qualifying matches, Sterling has truly proved himself a man for all occasions — a key component as Southgate searches for even greater attacking vibrancy with Qatar 2022 just 13 months away.

Playing Sterling, Grealish and Kane together is a relatively new idea. They have all started together just three times for England, once during Euro 2020 against the Czech Republic — when Grealish assisted for Sterling to score the only goal — and twice last month.

In September, England played Hungary away, Andorra at home and then Poland away. Sterling, Grealish and Kane were Southgate’s preferred trio in the two road matches, which represented the toughest World Cup qualification matches in Group I — a choice that could be interpreted as a significant show of faith.

Sterling and Kane scored against Hungary, too. After coming off the bench to net a penalty against Andorra in a much-changed lineup bereft of Grealish from the start and Sterling altogether, Kane delivered a superb long-range effort against Poland — a moment of magic at odds with his general form. Southgate, typically, was unconcerned about Kane’s Tottenham travails when unveiling his squad last week.

“Every couple of months I sit here and have to answer similar questions, and then Harry goes out and scores a lot of goals for us,” he said. “That’s the life of a high-profile player: You have to accept there’s going to be that speculation and intensity, that analysis of performances.”

Kane has been a slow starter before. It wasn’t until 2018 that he scored a Premier League goal in August, a bizarre anomaly he was grateful to put behind him three years ago after more than 1,000 minutes without success.

Equally, Nuno Espirito Santo is just 12 games into his tenure as Spurs boss and has yet to stamp his total authority on the group. Spurs have one of the worst xG numbers in the Premier League (7.25 from seven matches) and only three teams have taken fewer shots than Tottenham’s 73 (Brentford 72, Norwich City 71, and Watford 70). Last month’s 3-0 defeat at Crystal Palace was the first time in the division’s history that Kane had failed to have a touch in the opposition box, let alone a shot of any description.

There is concern among some Spurs fans that Santo’s approach may be too pragmatic or conservative for the club’s attacking players to perform at their free-flowing best. The same criticism has been levelled at Southgate despite reaching the Euro 2020 final and putting England on course to qualify for next year’s World Cup. However, there must also be a fear that another element in play is Kane simply struggling to find the same purpose after being denied the move he craves.

Can he continue to feel like the main man for England if those around him are playing Champions League football and winning major honours?

Sources at Spurs have indicated there is some worry that Kane’s troublesome ankles may be susceptible to injury on Andorra’s plastic pitch, a further issue to be considered ahead of Saturday’s game. But if there is a battle for Kane’s heart and mind, Southgate increasingly settling on Sterling and Grealish alongside him as England’s first-choice front line will also be an awkward reminder of what might have been.