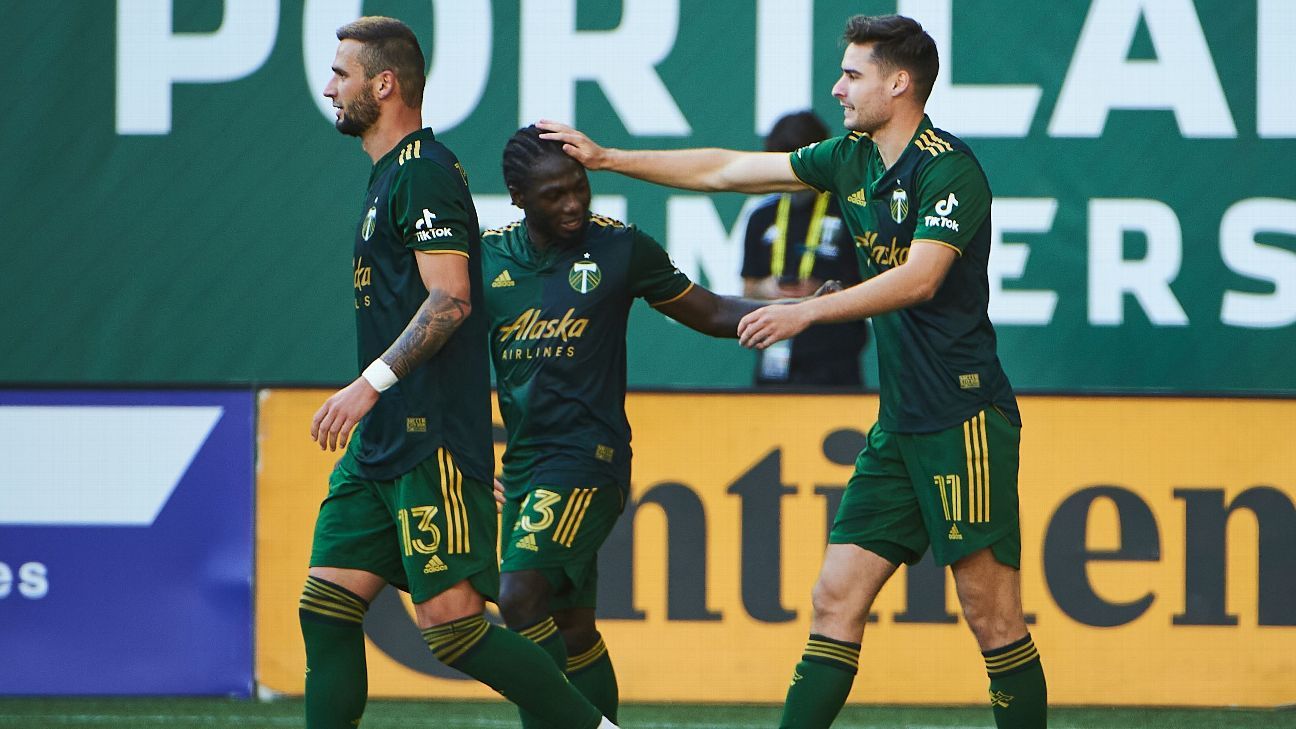 It wasn’t that long ago that the Portland Timbers were on the outside looking in at the Western Conference playoff picture. After two wins this week, though, they’re closing in on earning an MLS Cup playoff fixture at Providence Park.

Find out who else rose and fell in this week’s standings, and where your team sits in our Week 20 Power Rankings.

The Revs had the weekend off, yet still managed to lock up the top spot in the Eastern Conference thanks to other results. Its 4-1 midweek triumph over Montreal helped as well, with Gustavo Bou notching a goal and an assist.— Carlisle

A dominant 3-0 win against Colorado on Sunday night pushed the Sounders past Sporting Kansas City into first place in the Western Conference. Seattle has looked like best team in the conference for most of the season, and they’ve only solidified that of late. — Bonagura

A brace from Johnny Russell and another strong performance from MVP candidate Daniel Salloi saw SKC take care of Houston, 4-2, on Saturday. That win, paired with a 3-1 win at Dallas on Wednesday keeps Kansas City just two points back of first-place Seattle, which has a game in hand. — Bonagura

It’s hard to play much better than the Timbers have over the past month. They’re unbeaten in eight games with seven wins, including a 2-1 win at LAFC on Wednesday and a 1-0 win against Inter Miami at home on Sunday. They’ve built a seven-point cushion over fifth-place Salt Lake and will be one of the most dangerous teams in the league when the playoffs begin. — Bonagura

Even by his lofty standards, goalkeeper Andre Blake was outrageous against the Crew on Sunday, saving a penalty and denying Darlington Nagbe with a superb stop as well. The Union wasn’t bad in attack either, beating Columbus 3-0 to move up to third place in the East. — Carlisle

A pair of draws against Orlando and NYCFC kept Nashville in second place in the East, though with four of its six remaining games set to be on the road, maintaining that spot could be difficult. The fact that goalkeeper Joe Willis is in fine form should give Gary Smith’s side some confidence heading into the final stretch. — Carlisle

It was a long night in Seattle on Sunday, but despite the 3-0 loss, the Rapids are close to clinching a home playoff game and are still within striking distance of the top spot. Jonathan Lewis, Nicolas Mezquida and Auston Trusty scored in a 3-0 win against Austin in midweek. — Bonagura

It was a mixed bag for the Five Stripes this week, as they beat Miami at home before succumbing to Montreal over the weekend. The defeat will stick in the craw given how Atlanta had a second-half lead, and created some decent chances in the first half. The loss dropped Atlanta outside the East’s playoff places in a race that should go down to the wire.— Carlisle

After getting thumped at home by New England in midweek, Montreal secured a vital three points with a 2-1 comeback win over Atlanta. Romell Quioto was the hero with two goals, and Djordje Mihailovic upped his assist tally to 13. Now Wilfried Nancy’s side is back among the playoff places, with a one-point cushion over Atlanta. — Carlisle

The Whitecaps have to be the most under-the-radar team in the league. Following a 3-0 win against San Jose, they’ve lost just once in their last 15 games and have used that stretch to crawl out of the hole they dug early in the year. With 37 points, Vancouver is just a point behind seventh-place Minnesota and two points behind both RSL and the LA Galaxy, both of which have played one more game. — Bonagura

A 0-0 draw with Dallas on Saturday followed a 3-1 loss at D.C. United midweek, leaving the Loons just a point ahead of Vancouver for the final playoff spot. They do, however, have a game in hand over both Salt Lake and the LA Galaxy, which both sit just a point ahead in the standings. — Bonagura

Stoppage time was downright friendly to the Lions this week, as an own goal helped salvage a 2-2 draw against Nashville and then similar late heroics from Daryl Dike gave Orlando a 2-1 win over D.C. United. The win catapulted Orlando from eighth to fourth in the oh-so-tight Eastern Conference standings.— Carlisle

The Black-and-Red had to settle for three points out of six after beating Minnesota, but then losing late to Orlando. Julian Gressel continues to be a man on fire, with his latest tally giving him two goals and five assists in his last five games. — Carlisle

It wasn’t a good week at all for Ronny Deila’s side. Not only did the Cityzens secure just one point from two games against Chicago (loss) and Nashville (draw), but standout defender Anton Tinnerhold went down with what looked like a serious leg injury. A talented side like NYCFC shouldn’t be stuck in the mire of the playoff race, but that is their reality. — Carlisle

The Red Bulls’ playoff heartbeat is still beating after tying the Union in midweek and then beating Cincinnati away. Andrew Gutman bagged the only goal against his former club and did the compulsory “I’m-not-celebrating-against-my-former-team” celebration. The Red Bulls are now six points below the playoff line. — Carlisle

The Quakes had a nice stretch during which it looked like they could challenge for a playoff spot, but a pair of losses this week to Seattle (3-1) and Vancouver (3-0) leaves them five points below the playoff line with time running out. — Bonagura

Anderson Julio‘s stoppage-time winner against the Galaxy on Wednesday might be the MLS Goal of the Season. Not only was it an incredible display of skill, it was vital: RSL sits tied with the Galaxy on points, but holds the tiebreaker for fifth place after a disappointing 2-1 loss to Austin on Saturday. — Bonagura

Miami tightened up its defense, but it wasn’t enough to avoid a pair of 1-0 defeats to Atlanta and Portland. The latter defeat was especially galling to Phil Neville after a late Julian Carranza goal was disallowed. The losses extended Miami’s losing streak to four and dealt a hammer blow to the Herons’ faint playoff hopes.— Carlisle

LAFC’s 2-1 loss to Portland midweek was its first-ever home loss to the Timbers, while a 1-1 draw with the Galaxy on Sunday extended LAFC’s winless streak to four games. Another extended injury absence from Carlos Vela and the departure of Diego Rossi have left Bob Bradley’s team toothless in the final third and their playoff hopes are fading quickly as a result. — Bonagura

The Galaxy remained undefeated all-time at home against LAFC, but have slipped to sixth place in the Western Conference and their winless streak has reached nine games. Their 2-1 loss to Real Salt Lake on Wednesday happened after a stunning second-half, stoppage-time goal from Anderson Julio rendered a 76th-minute goal from Chicharito obsolete. — Bonagura

The Crew couldn’t capitalize on the momentum generated from its Campeones Cup triumph over Cruz Azul, failing to take advantage of twin gifts in the form of a Union red card and an earned penalty kick. The 3-0 defeat to Philadelphia meant Columbus’ wiggle room in terms of postseason qualification is decreasing rapidly. — Carlisle

Toronto is on a roll after dispatching Chicago 3-1, giving the Reds 10 points from a possible 12. Vets and youngsters alike have been chipping in, including defender Omar Gonzalez as well as young midfielder Jacob Shaffelburg. Too little, too late though. — Carlisle

With five games left in the season, Houston sits just two points ahead of last-place Austin in the Western Conference standings and will miss the playoffs for the fourth straight season. If the Dynamo finishes last, that would make it back-to-back seasons and three times in six years. — Bonagura

A 2-1 win against Real Salt Lake, through two goals from Cecilio Dominguez, makes it two wins in three games as the expansion side tries to avoid a last-place finish. Striker Moussa Djitte has made a significant impact since becoming a starter against San Jose on Sept. 18. — Bonagura

The axe finally fell on manager Raphael Wicky, oddly enough after an impressive 2-0 win in midweek over NYCFC. A subsequent 3-1 defeat to Toronto saw the Fire revert to its losing ways, though 17-year-old keeper Gabriel Slolina was valiant in defeat. — Carlisle

A 3-1 loss to Sporting Kansas City and a goalless draw with Minnesota this week extended Dallas’ winless streak to seven. It has not beaten anyone other than Austin since July. — Bonagura

A fifth consecutive loss — this time a 1-0 home defeat to the Red Bulls — cemented Cincinnati’s position at the bottom of the league table. With Chris Albright reportedly taking over as GM, it looks like yet another rebuild is in order in the Queen City. — Carlisle