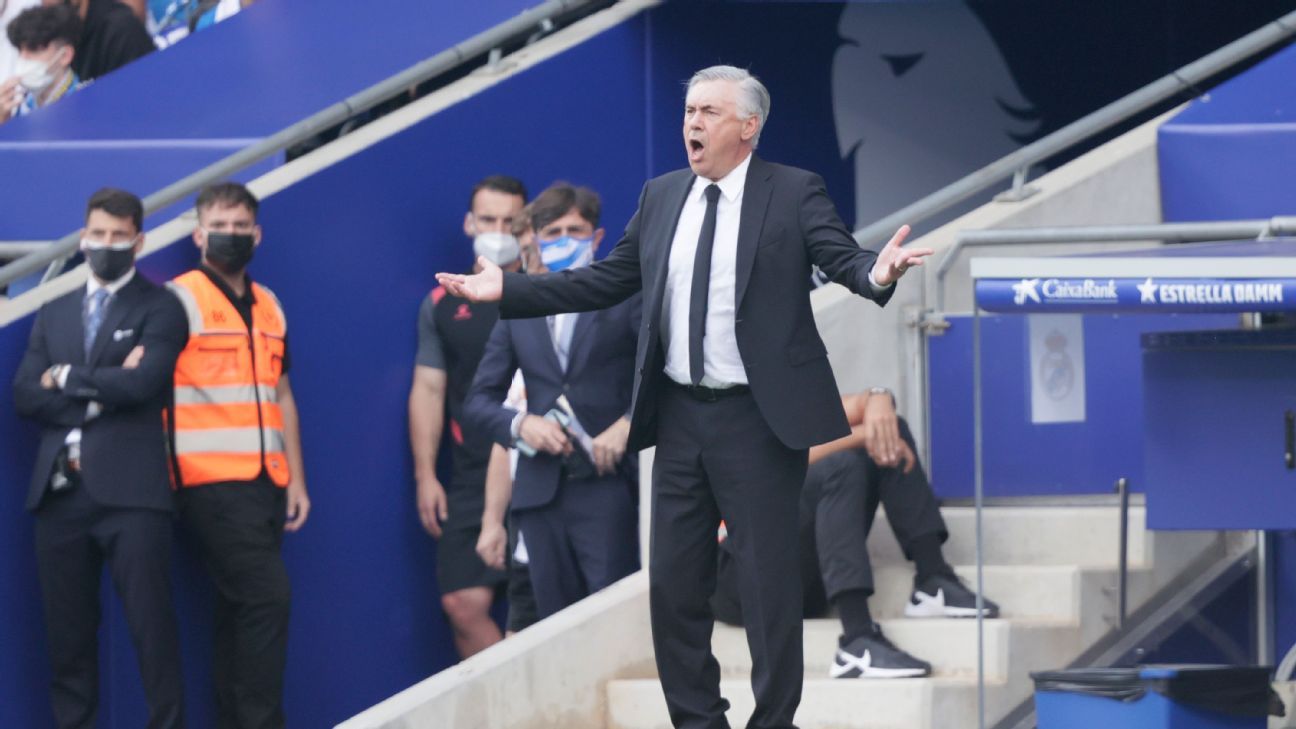 Carlo Ancelotti has called Real Madrid‘s 2-1 LaLiga loss at Espanyol the “worst game” of his second spell in charge so far, citing “confusion out on the pitch” and saying “the team looked disorganised” in a brutally honest assessment.

Goals from Raul de Tomas and Aleix Vidal put Espanyol 2-0 up after 60 minutes, before Karim Benzema pulled a goal back and substitute Eden Hazard had a late strike ruled out for offside.

The result followed an embarrassing 2-1 home defeat to Champions League debutants FC Sheriff and a 0-0 draw with Villarreal in a week to forget for Ancelotti’s team.

“We played badly. There isn’t much else to say,” the coach said in a postmatch news conference. “We started the game with an idea, and then with the goal we conceded we weren’t able to stay calm. There was confusion out on the pitch. The team wasn’t well positioned with or without the ball. I have to be honest, it’s our worst game.”

Ancelotti contrasted the performance with the “small details” he said were responsible for the Sheriff defeat, saying “today wasn’t an accident. We didn’t play well. We deserved to lose. We reacted too late.”

He also appeared to blame Real Madrid’s players for a failure to execute his instructions. Ancelotti brought Toni Kroos into the side for his first start of the season after recovering from injury, picked Eduardo Camavinga at left midfield and played David Alaba at left-back, an idea he had previously dismissed.

“I think the plan was quite clear, I’m not here to explain it, but I agree the team looked disorganised,” Ancelotti said. “We didn’t have the right positioning with the ball… We have to fix it. I’ve spoken to the players and they agree.”

He added: “I thought that [David Alaba] could help in attack. We didn’t have good balance on that side but that wasn’t his fault, I told him to push up and the midfielder had to cover, but that didn’t happen.”

Defender Nacho Fernandez admitted the team “has to improve defensively” and pointed to the number of players out injured, with Dani Carvajal, Ferland Mendy and Marcelo all unavailable on Sunday.

“We have players missing,” he said. “We have a good squad, we can do better than we’ve done in these last three games. When you concede, everything is more difficult. Espanyol are well-organised and things didn’t go our way today. We’ve had a bad week. Now we have a break, we have to reflect and work on what’s wrong.”