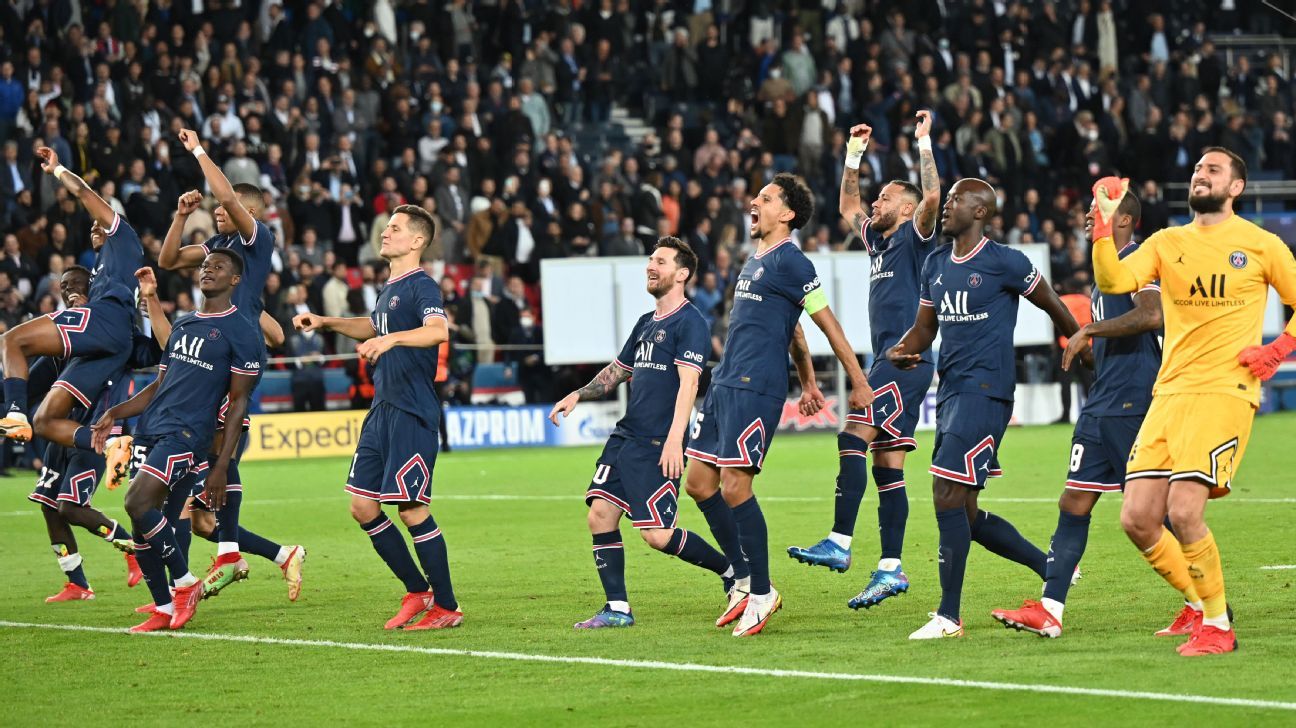 Maybe there was something in the air from the beginning. Seeing Mauricio Pochettino and Leonardo, Paris Saint-Germain‘s manager and sporting director, smiling and joking together as the team arrived at the Parc des Princes before their 2-0 Champions League win over with Manchester City; witnessing how relaxed midfielder Marco Verratti was before facing one of the strongest teams in the world having been out for a month; looking at Lionel Messi‘s determined face in the dressing room next to Leandro Paredes after missing the last two matches, things felt different. It felt like, despite the gigantic task ahead, this team knew it would rise to the occasion.

Even though they have eight wins from eight games in Ligue 1, the Parisians were still searching for cohesion. Defensive solidity was missing — three clean sheets in those eight matches, while they conceded the opening goal twice — balance was lacking and the incredible front three of Messi, Neymar and Kylian Mbappe still wasn’t clicking given their limited minutes together.

On Tuesday against City, at an incandescent Parc des Princes in all its finery, it was a night to respond. And PSG did just that.

Before the game, Pochettino insisted on using a defensive block, of course. Against Pep Guardiola teams you have to be extremely focused to cope with all their patterns of play, diagonal passes and runs into the half-spaces. Pochettino reminded Achraf Hakimi and Nuno Mendes, his two attack-minded full-backs, to respect the distances and be more cautious with their decisions to surge upfield. The manager also handed Gianluigi Donnarumma his Champions League debut in goal for PSG because he’s better than Keylor Navas on crosses into the box, and it proved to be the right call as the 22-year-old Italian was in complete control.

What Pochettino had not asked for, though, is for Messi to lay down on the floor behind the PSG wall on a late City free-kick in a dangerous position. Messi took this decision himself. No-one asked him to do it (who would dare?), and no-one made him do it; he took the initiative himself for the good of the team. His highlight, obviously, will always be his goal, his first one for the club, after a blistering counter attack, a one-two with Mbappe and a top-corner finish that left Ederson motion-less. But that moment on City’s free kick showed a new side of the superstar.

The thread of the game was pretty simple for PSG: they played as a team. When it was tough in the second half, in the thick of intense City pressure, they stayed strong and united, defending well — and desperately, at times, but always together. That was the message from Pochettino after the game, too. He praised his side for the solidarity and the discipline they showed without the ball and when stuck in their own half. The balance was much better than it was against Club Brugge in the first group game, where the Ligue 1 leaders struggled to a 1-1 draw.

With the ball in the first half, PSG’s opening goal came from a very Manchester City-esque move. They had as much possession as City and kept the ball well, with Verratti the key man controlling the tempo despite the fact he had not played for PSG since August and had trained only twice prior to the game.

For this game, Verratti was deployed as the holding midfielder instead of his usual more advanced position, while Idrissa Gueye and Ander Herrera were a bit higher up, chasing possession. Verratti’s role was to beat City’s press, relieve the pressure and start the attacks. He struggled in the second half due to a lack of fitness and Kevin De Bruyne almost man-marking him, but Guardiola said it best after the game: “I am in love with [Verratti]. He is an exceptional player. Even under pressure, he manages to find passes which enables the midfield to be free.”

It might not come as a surprise to you, but the Italy international still somehow had the energy to end his perfect night at the Medellin, one of Paris’ best (and Verratti’s favourite) nightclubs, until the early hours of the morning with Mbappe and Neymar. Pochettino gave his players Wednesday off, which meant party time for some after this superb win.

After the game, PSG president Nasser Al-Khelaifi came into the dressing room, where he hugged and congratulated each player. “Now that you’ve scored one, many more will come,” he told Messi. Not long after, the Argentine met another VIP guest when he took a photo with Ed Sheeran, the English pop singer, who was at the Parc des Princes and whose music Messi loves.

Back in the dressing room, there was happiness galore. Gueye had his Man of the Match trophy next to him; Mbappe and Presnel Kimpembe, sat next to each other, were cracking jokes; the “MNM” also posed for a photo, bare chests and abs out. However, there was nothing over the top. This is just a group game, a step forward in the right direction. But make no mistake, it was also a huge statement.