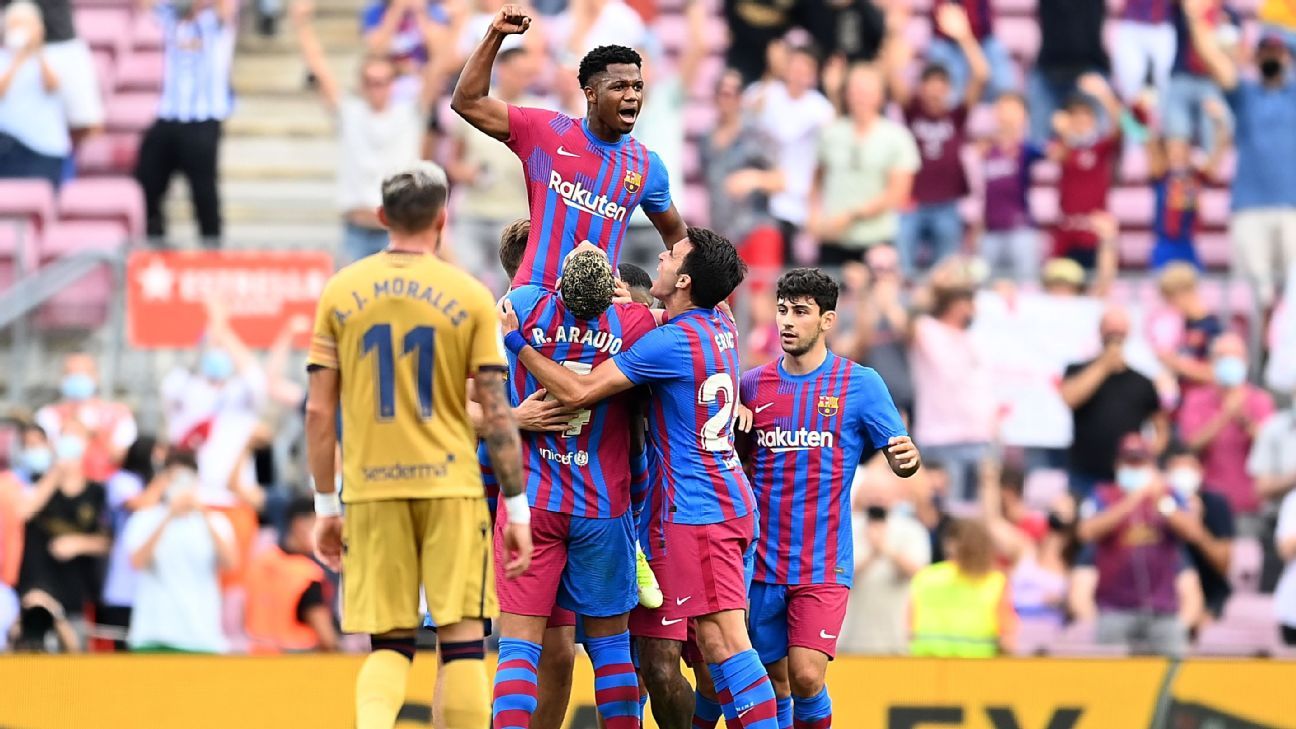 The last time a player stood triumphantly towering over a clamour of Camp Nou worshippers it was, of course, Lionel Messi in 2017. Barcelona had just crushed Paris Saint-Germain 6-1 in the greatest European comeback in history, and the little Argentine genius ran to the fans behind the goal, leaping up onto an advertising hoarding and creating a photo opportunity that, within days, had broken all club records and had been liked or “visited” more than 70 million times.

On Sunday, it was Ansu Fati.

His goal, after nearly a year out with an injury that should have seen him back playing within a couple of months, was epic. On the pitch for what felt like a mere handful of seconds, he’d already been acclaimed wildly by the fans every time it looked like he might make his hugely anticipated comeback.

He seemed to have earned his team a penalty (which was rejected) but, running into added time, he deftly won the ball back from Jorge Miramon with an aggressive press and some fabulous footwork before sprinting 25 metres, twisting Miramon inside out, and thrashing the ball past Aitor Fernandez in the Levante goal.

Scenes. Remarkable scenes. The Camp Nou exploded. Levante’s 32-year-old veteran defender held his head in his hands. The Ansu Fati factor: It’s going to be a long queue of defenders asking each other, “what just happened?!”

Ansu had promised his family that he’d score on his comeback. Their year of excruciating agony had included four separate times when he was given the bad news that an operation was needed — three of which were not only unexpected, they were devastating. The surgeons’ work had failed.

This 17-year-old prodigy — already Barcelona’s youngest scorer, plus the youngest ever to hit the net in the Champions League and for Spain‘s national team — had been forced to watch in frustrated misery while his club team won the Copa del Rey, while they were dismantled by PSG in the Champions League and while La Roja made it to the semifinals of Euro 2020 and were crying out for a goal scorer who could have helped them beat Italy… and then perhaps England in the final.

Up in the stands, the family hugged one another in total disbelief. Any other itinerant fans in that area, who stood still long enough, got sucked into the hug fest. It was human joy at its most naked and unrestrained.

Ansu’s mum leapt up and down before, eventually, singing along to the FC Barcelona anthem that bellows out before and after every match. His dad cried. Ansu ran to thank the various medics and physios, particularly Dr. Lluis Til, who’d not only got him ready physically, they’d bolstered him spiritually and psychologically across the barren months. The doc’s eyes were a bit moist too. The whole tableau was beautiful.

Ansu ending his utter misery in such extraordinary fashion deserved the human tower, the human game of statues that followed his goal. First Ronald Araujo bear-hugged the little striker and hoisted him skyward. You’ve seen ballet dancers onstage, indeed you’ve seen rugby players in the lineout do the same. Then the pair became a cluster. Memphis Depay, Eric Garcia, Nico Gonzalez — they huddled around in worship and Ansu hovered there in midair, above them roaring “Vamos!” and evoking memories of Messi from four years ago.

But the 3-0 win against Levante — so crucial against the backdrop of Barcelona having played cluelessly a week before and in the context of facing one of their most financially vital matches of their entire history this week against Benfica in Lisbon — wasn’t Ansu’s match. Not really.

Despite the footballing mercury rising and bursting out of the thermometer when the little prodigy scored, the afternoon had been utterly owned by another teenager. His real name is Pablo Martín Paez Gavira, but this being football, he’s universally referred to as Gavi. Whether you’ve heard of him or not, please trust me: He’s another little phenomenon.

In fact, I’ll go this far: I do not recall, indeed I don’t believe that, any club in modern history have given debuts to four such exceptional and ready-for-elite-football 16- to 18-year-olds in such as short space of time as Barcelona have done to Ansu, Pedri, Ilaix Moriba and Gavi. Have a go, prove me wrong if you can, but this isn’t simply about their remarkable ages — although that tells a brilliant story about talent spotting and development within Barcelona’s “futbol base” system.

Ansu started for the first team aged 16 years and 298 days. Pedri was 17 when he made his full Barca debut. Ilaix two days past his 18th birthday. And now here’s Gavi who, little more than a month ago, was 16. I can barely believe we are seeing such beautiful flowers emerge from a barren desert twice within 20 years — at the same club!

Steve Nicol discusses the huge expectations on Ansu Fati after he returned from injury with a special goal vs. Levante.

When Xavi, Andres Iniesta, Carles Puyol and Victor Valdes emerged at the Camp Nou, their ages ranged from 18 to 20, older than this crop, but it’s a millennium too early to think that Ansu, Pedri, Ilaix and Gavi can achieve what the former fab four did. However, what’s comparable, and amazing, is that Xavi, Iniesta, Puyol and Valdes came through at a time when Barcelona were either beginning or deep in the midst of a six-year trophy drought and when the club was in a huge financial crisis.

If this Cruyff-designed system is trusted, maintained and staffed by right-thinking people, it is simply astonishing at producing footballers who have been chosen for their natural ability but whose brains, technique, maturity and ambition have been ultra-trained. The result is players making prodigious, even historic, impacts at a ridiculously young age.

But back to Gavi. Born in the same 35,000-inhabitant Andalusian town as World Cup winner Jesus Navas and European Under-21 Championship winner Fabian Ruiz — how extraordinary is that — the Spanish football tom-tom drums have been beating about this kid since he was just 11. This summer he played, with stellar results, against both VfB Stuttgart and Juventus (two wins) either side of his 17th birthday. On his Camp Nou debut against Levante he was, by a distance, the man of the match.

Quick to spot spaces, intelligent about dragging opponents around, limpet control on his right foot, speedy to pass-move-offer-pass again; this is a guy who, whether he ever reaches their heights, immediately evokes both Xavi and Iniesta. I guess if you grow up watching the legendary midfield duo, admiring them and then spend several years in Barcelona’s youth system, then why wouldn’t you?

He’s got a nice turn of pace, but most importantly it’s the ball and his passes which add velocity when he plays. Nearly as happy on the left or right of a midfield three, Gavi simply shimmers with the joy of playing football intelligently.

I’m not now, nor will I ever, use the expressions “the new Iniesta” or “the new Xavi,” but the fact remains that Samuel Eto’o’s great description that these two players “made the difficult things in football simple” 100% applies to Gavi. Interpretation of space, anticipation of action around him, the bravery to be always offering to receive a pass, pre-knowledge of what to do next, peripheral vision, passes to the feet of a teammate in tight spaces, passes in front of a teammate when the transition is a counterattack into space (how many players fail at this), nice first touch, a little turn of speed to get out of tight spaces; this 17-year-old Andalusian has all these things — as did Xavi and Iniesta.

While this was his home debut, those who’ve been watching this season had seen clues of what was to come. A revelation against Gimnastic Tarragona and Stuttgart, Gavi was simply terrific in the win over Juve in the Gamper. Then he pulled off that lovely lofted chip in a massively crowded penalty box, which brought the yearned-for equaliser at home to Granada, when Araujo’s 90th-minute header saved Ronald Koeman’s bacon.

Then came the cameo against Bayern Munich. With the game already long gone, Gavi came on for a half hour. This spindly, inexperienced teenager was, it transpired, full of the same fury, vigour and aggression as the majority of the fans.

After the fouls on Goretzka and Muller, the crowd chanted his name, over and over. Referee Michael Oliver warned him about his behaviour; moments later Gavi totalled Kimmich and earned his debut first-team booking. The Camp Nou roared approval at his chippy, “not on my patch” spirit.

Whatever happens to Koeman — and the options are many and varied — only fools will fail to recall that on the day Ansu made his comeback, Gavi and 19-year-old Nico were on the pitch flying the flag for Barcelona’s brilliant academy football. Not even defeat in Lisbon, should it occur, must be allowed to obscure the birth of some shimmeringly beautiful futures.