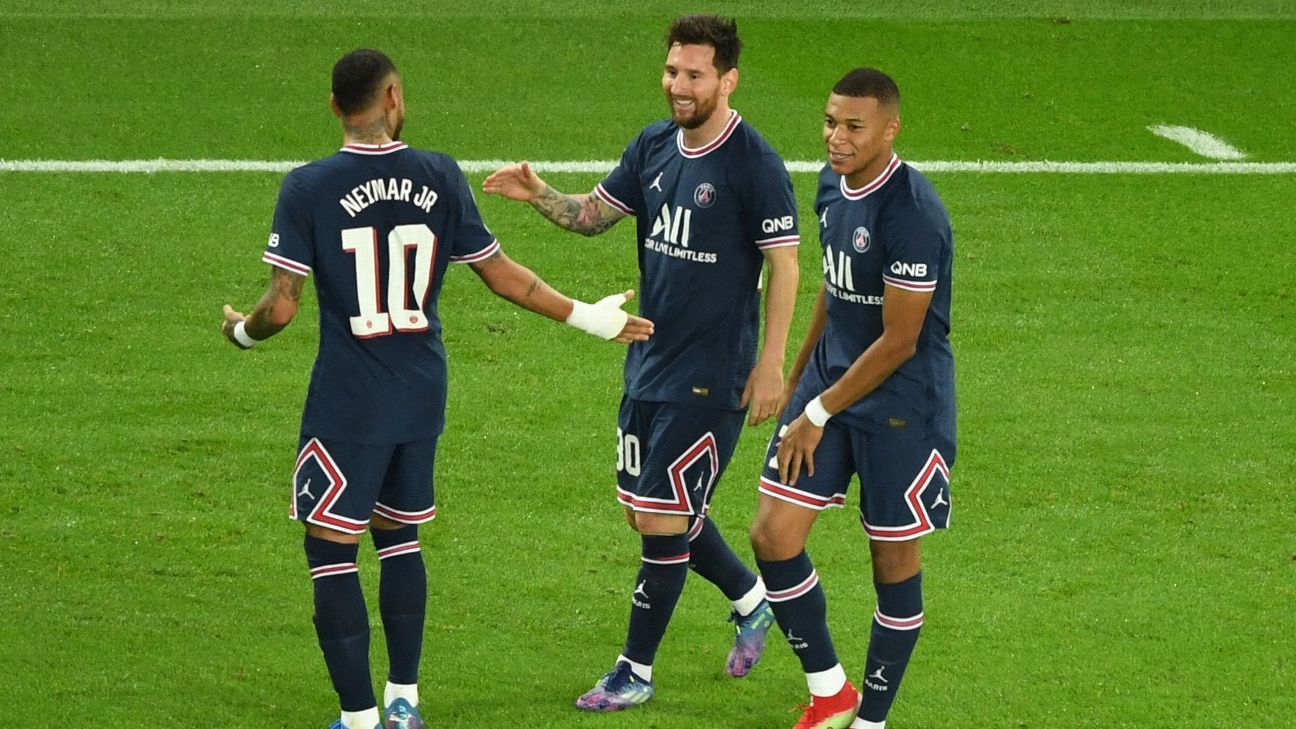 PARIS — In the grand scheme of things, 263 minutes is the blink of an eye, but not for Lionel Messi. His explosion of relief and joy as he ended his nearly four-hour wait for his first goal in a Paris Saint-Germain shirt — a stunner in a 2-0 Champions League win against Manchester City — suggested that every minute of his “drought” felt like a lifetime.

Even the biggest superstars feel the heat and weight of expectancy and Messi, whose early weeks at PSG following his arrival last month as a free agent from Barcelona had seen him struggle to make an impact for Mauricio Pochettino’s team, was already into his third-longest goalless start to a season. He took 298 minutes to get off the mark for Barca in 2005-06 and 288 minutes in 2019-20, so the last thing that Messi, Pochettino and PSG’s hugely ambitious owners would have wanted would be for the 34-year-old to set an unwanted new record in Paris.

“Oh, I celebrated today,” Pochettino said of his compatriot’s strike after the match. “I don’t usually celebrate goals, it’s internalised. Today, I let out a shout.

“I’ve spent long enough seeing so many Messi goals against me, I had to celebrate the one that was for me.”

Messi has been signed as the missing piece of PSG’s Champions League-winning jigsaw, so it suited everybody for him to finally get on the scoresheet. Timing is everything, and Messi has always been a master of picking his moment, so he really couldn’t have chosen a better time, place or opponent against whom to score that first goal.

Manchester City, despite this Group A loss, are likely to be one of the biggest threats to PSG’s ambition of winning the Champions League this season, but the fact that City and coach Pep Guardiola had worked so hard to get Messi themselves will make the 74th-minute goal in Parc des Princes even sweeter for PSG’s Qatari owners. Even Guardiola conceded that it was a “fantastic” goal by his former Barcelona player.

PSG beat City to Messi’s signing, and he has now shown them precisely what they missed out on. And who would bet against him doing the same in the Champions League final in St. Petersburg in May?

His goal was up there with all the other 120 he had scored in this competition for Barcelona. A typical Messi burst from midfield, followed by a one-two with Kylian Mbappe, ended with the Argentina international striking a left-foot shot past goalkeeper Ederson from 20 yards.

After so many years in Barcelona’s colours, this was finally Messi’s rhapsody in PSG blue. He raced away in celebration as though it was the first club goal of his career, rather than number 673.

While it was a majestic strike, and one created with the help of Mbappe, this game showed that Pochettino must still find the right formula for his stellar front three of Messi, Mbappe and Neymar to work as a unit for the team.

Messi’s goal will paper over the cracks for now, and it might also prove the spark that ignites the so-called “MNM” strike force into becoming the world’s best, but after Idrissa Gueye’s seventh-minute goal had given PSG the lead, Messi, Neymar and Mbappe struggled to gel as a true front three.

PSG’s problem is that they are three supremely talented forwards who all expect to be the main man. While Messi is around, that will always be him, so Neymar and Mbappe may ultimately prove incompatible.

One of them may have to go. Mbappe has already said he wants to leave for Real Madrid when his contract expires next summer, and that may yet work in PSG’s favour. The best attacking threesomes always need at least one player who is willing to sacrifice himself for the greater good of the team, but PSG don’t have that in Neymar or Mbappe.

Messi and Neymar worked so well together at Barcelona because of the unselfishness and work rate of Luis Suarez, while Karim Benzema played a similar role in Real Madrid’s “BBC” forward line alongside Cristiano Ronaldo and Gareth Bale. Roberto Firmino does that job at Liverpool alongside Mohamed Salah and Sadio Mane, while Manchester United won the Champions League under Sir Alex Ferguson in 2008 because Wayne Rooney and Carlos Tevez each parked their ego to provide the platform for Ronaldo to score so many goals in a red shirt.

PSG need a Benzema, a Suarez or a Firmino as their third man. As it stands, they have three forwards who could become less than the sum of their parts because they are all wanting to occupy the same space and make the same runs.

Messi won’t change, and his goal illustrates why he shouldn’t be expected to do so, but if PSG are to end their wait for Champions League glory, something will have to give. Long term, that is likely to be Mbappe moving on, but for this season at least, Pochettino has to make the three of them work as one.

It may seem easy when you look at the names on paper, but when you see Neymar struggling to get involved and Mbappe not knowing whether to run at goal or look for Messi, it becomes clear that it’s not quite as simple as throwing great players together and expecting them to deliver. But you can always rely on Messi, and you probably won’t have to wait so long for his next goal either.

Barca held to 0-0 draw by Rayo in LaLiga opener
Ancelotti: ‘Big doubt’ over WC impact on players
Tuchel faces FA probe after criticising referee
England’s Wiegman, Mead up for UEFA award
Premier League in 1992: The rebrand that changed everything