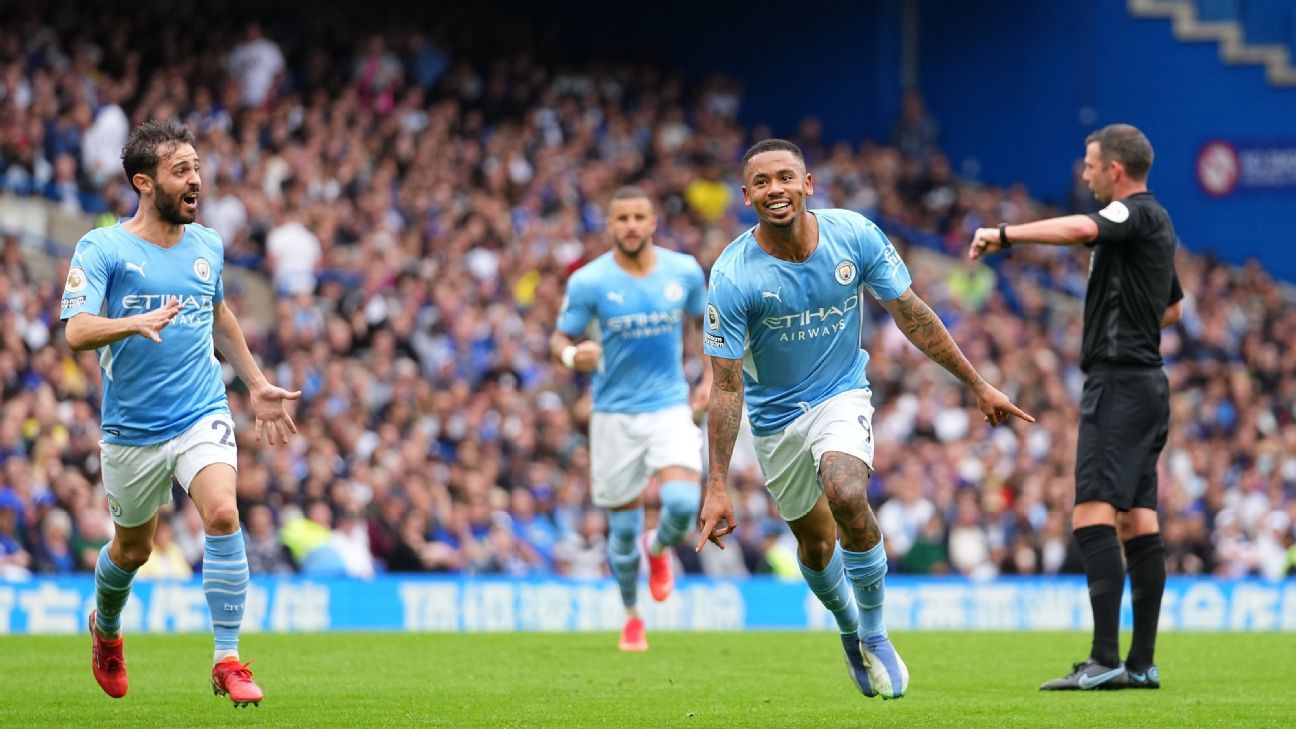 LONDON — Every team with title aspirations needs a reliable No.9 to deliver in the biggest games and Saturday’s clash between Champions League winners Chelsea and Premier League champions Manchester City was settled by one of them. It just happened to be the guy who has spent all summer hearing his team needs a new striker, rather than the £97.5m club record signing, who scored the clincher as City won 1-0 at Stamford Bridge.

This was a day when Pep Guardiola and his players reminded everyone that City remain the team to beat in the Premier League, but it was also an occasion when Gabriel Jesus showed that he can still be the man to score the goals to deliver more success at the Etihad.

And if we are talking about reminders, Romelu Lukaku’s underwhelming performance up front for Chelsea also highlighted how the former Everton and Manchester United forward still has it all to prove when up against the top teams and best defences.

It was Jesus who performed like the complete centre-forward in this game, not Lukaku, and that was all the more surprising considering that the City striker was not even selected to play in his favoured position by manager Guardiola. Jesus spent all but the final eight minutes of this game operating on the wide right of a front three, with midfielder Phil Foden deployed as a false nine through the middle, but the Brazil international was a livewire from start to finish, pressing the Chelsea defenders throughout and taking a physical battering from Antonio Rudiger.

His goal — a close-range shot deflected off Jorginho in the 53rd minute — was a reward for his effort and ability to shrug off the disappointment of having to play out of position for much of the game. It was also enough to consign Chelsea to their first defeat of the season and end Thomas Tuchel’s three-game winning streak over City since replacing Frank Lampard as manager in January.

“Gabriel is always giving everything,” Guardiola said. “You cannot say anything to him. Every single game, he runs for his teammates in every single actions. These types of players make me happy.”

It is in the high-pressure games that you learn most about teams and both Tuchel and Guardiola will have come away from this clash armed with new knowledge about their attacking play. Tuchel, for example, may already have realised that his team needs greater variety going forward if they are to win the Premier League this season, as this defeat offered confirmation of that.

Lukaku’s summer arrival from Inter Milan was designed to give Chelsea the cutting edge that they lacked last year, when Timo Werner failed to measure up as a consistent scorer following his £47.6m arrival from RB Leipzig, but as he did against Liverpool last month, Lukaku failed to threaten against City. The 28-year-old has certainly given Chelsea a focal point up front and his hold-up play has greatly improved during his two years in Serie A, but his movement continues to be predictable and he still doesn’t do enough to go in search of the ball when his team struggles to deliver it to him.

Perhaps Chelsea needed the creativity of Kai Havertz from the start of this game, rather than as a 60th minute substitute, to get the best from Lukaku, but after failing to impress against Liverpool, Lukaku has now done the same against City and, at some point, he has to provide a threat in these games if Chelsea are to win the title. If he can add the work-rate and movement of a Robert Lewandowski, Harry Kane or Edinson Cavani, Lukaku will make Chelsea formidable, but right now, he is making life far too easy for the top-class defenders he is facing.

City forward Jesus is a different player to Lukaku, but he is a centre-forward nonetheless. That he has not been trusted by Guardiola to fill the void left by Sergio Aguero’s summer move to Barcelona highlights the manager’s lack of faith in the 24-year-old. City’s failed pursuit of Kane will have done little to boost Jesus’s confidence either. But while he is not regarded by City as the solution to their search for a world-class centre-forward, Jesus’s qualities enable Guardiola to play with a front three in the absence of a Kane or Lewandowski.

Jesus stretches defences and selflessly soaks up physical challenges to hold the ball up for his advancing teammates. And he will also go looking for the ball or make the runs that create space for the likes of Foden, Kevin De Bruyne, Bernardo Silva and others to attack teams.

“Sometimes we believe we need a proper striker to finish, but the important thing is the way we play,” Guardiola said. “The most important thing is doing it as a team and as a unit. It’s like last season. Sergio [Aguero] was injured all year and we won the Premier League.”

Jesus may never play through the middle again under Guardiola, but he can still be an asset and he showed that against Chelsea, who carried virtually no threat until the closing stages. Despite their late flurry, Chelsea ended the game without registering one shot on target.

Yes, they had started the season well prior to this defeat, but Chelsea still don’t possess the variety of City and Liverpool when going forward. Early season hype has suggested that they are favourites for the title, but this was a much-needed reality check. As for City, they still need a centre-forward, but they don’t lack players capable of scoring to win big games.

Chelsea still need to prove they have that in their locker.