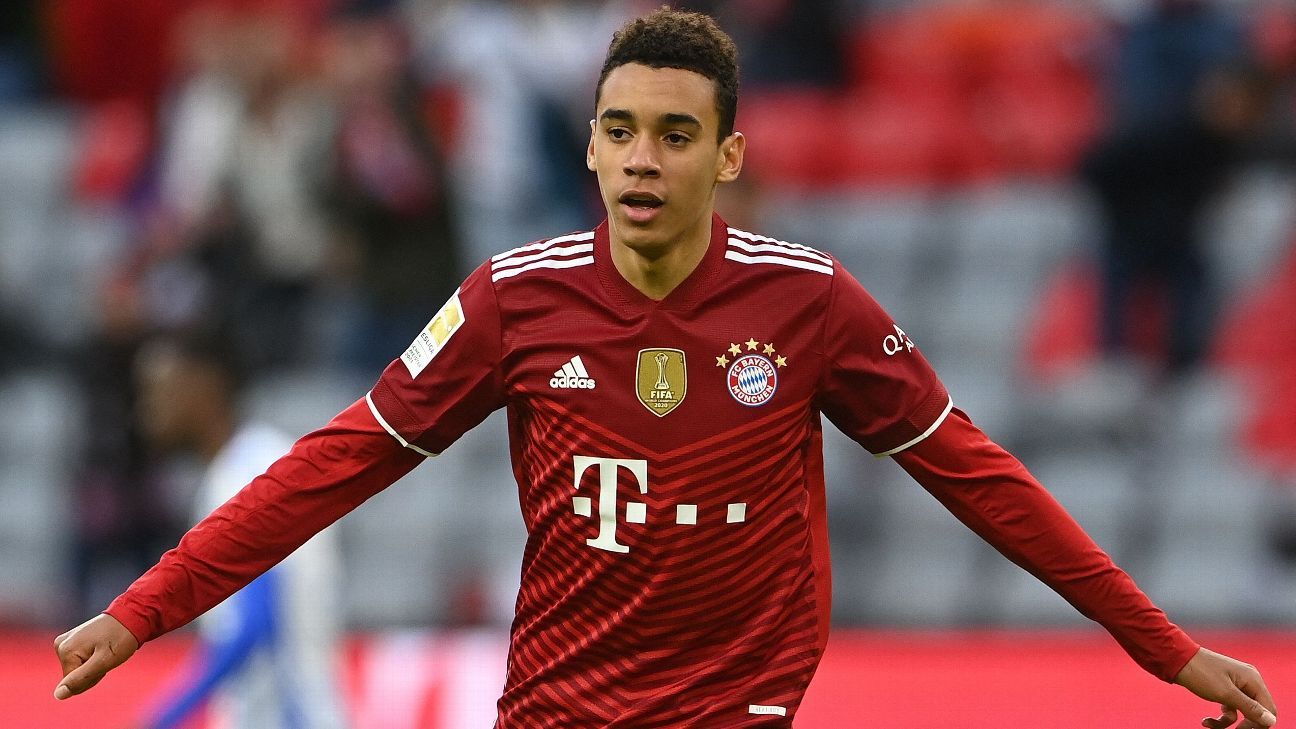 ESPN’s lead Bundesliga commentator Derek Rae returns with his regular column, this week looking ahead to a back-to-back Saturday treat for all German football fans. Super-Samstag is almost upon us.

There was a certain eeriness about that train journey from Cologne to Munich on Saturday, Feb. 8, 2020. My colleagues at the DFL’s TV operation had strongly suggested I take an earlier connection than planned as a big storm — named Sabine by weather forecasters — was about to engulf Germany. Train service was likely to be disrupted on a grand scale and it was crucial to find a safe harbour in my Munich railway station hotel before chaos ensued.

In addition, the first cases of COVID-19 had been confirmed in the Bavarian capital, although little did we know that our world was about to be completely turned upside down for the long term on that score.

I was Munich bound to commentate on the Sunday confrontation between Bayern Munich and RB Leipzig for the world feed. But the Saturday night match was also a potential thriller involving Bayer Leverkusen and Borussia Dortmund: a Westduell (western duel) with a history of high scoring. As any regular German traveller will tell you, getting internet service on Deutsche-Bahn ICE trains can be something of a lottery. But I was able to follow much of what turned out to be an epic, one of the great Bundesliga matches of recent times, settled 4-3 in Leverkusen’s favour thanks to a pair of late Leon Bailey goals for the Werkself.

My Bayern-Leipzig game at the Allianz Arena the next day was a goalless top-of-the-table clash but still a gripping encounter with chances for both sides. Leipzig were very much in the title race at the time and arguably acquitted themselves better in the second half than Bayern.

That was Julian Nagelsmann’s first season in charge of the Sachsen club. Now he’s in his maiden campaign coaching the Rekordmeister, aided by former Leipzig stalwarts centre-back Dayot Upamecano captain Marcel Sabitzer. Games between these two clubs take on an ever greater significance with each passing season, and the Nagelsmann factor only heightens the drama.

Saturday really should be named Super-Samstag! If you’re a Bundesliga fan, it doesn’t get much better than Leverkusen-Dortmund in the early slot, followed an hour or so later by Leipzig-Bayern in the late one. To hopefully enhance your viewing experience, consider these factors in this week’s form check:

Borussia Dortmund under Marco Rose are nothing if not entertaining. In four competitive matches this season, they’ve scored ten goals and conceded nine. That last statistic owes much to an unsettled defensive personnel situation, with Mats Hummels missing all but a few minutes, a right-back position under construction and a style that at times can appear overly open.

As a neutral, though, you quickly forgive this liberal defensive approach in admiring the Vollgasfussball (full-throttle football) we’ve seen, especially in the home wins against Eintracht Frankfurt and TSG Hoffenheim. Erling Haaland is fresh from his second international hat trick and 18-year-old Jude Bellingham continues to play the kind of football that puts him on course to join Haaland as a true world star.

The international window hasn’t been too kind to BVB on the injury front, with Giovanni Reyna, Thomas Meunier, Marco Reus and Axel Witsel all returning early to Brackel HQ. It remains to be seen who will and won’t be available.

Leverkusen have specialised in churning out goals so far. Coach Gerardo Seoane has clearly put his own stamp on the team, and eight goals for in the past two games tells only part of the success story.

The football has been dynamic and eye catching, with Moussa Diaby arguably the Bundesliga player of the opening three rounds. Patrik Schick, with two goals in his past two matches, is carrying on where he left off at the Euros.

Another key so far has been the defensive midfield partnership of Charles Aranguiz and Exequiel Palacios, but sadly due to the timing of the South American World Cup qualifiers, neither will start on Saturday — and furthermore, Julian Baumgartlinger is poised for another long spell on the sidelines following another operation on his knee. Recent signing from Union Berlin, Robert Andrich, has already received a start guarantee from Seoane and will probably have the surefooted Kerem Demirbay alongside him.

Whereas Bayern’s first XI is a true force to be reckoned with, it has been only fair to question the depth of the player pool. Last summer’s supposed squad strengtheners — Bouna Sarr and Marc Roca — didn’t do much to add quality in reserve, although it’s not yet too late for Roca.

In 21-year-old Josip Stanisic 19-year-old Tanguy Nianzou, Bayern have players who can help now while still having big future upsides. And by returning to the established well in Leipzig to sign Marcel Sabitzer, the Bavarians have a seasoned squad player who can play deep in midfield, higher up in midfield or even out wide. This will be especially important entering the Englische Woche periods (times of the season with more than one game per week).

Leroy Sane proved some of the doubters wrong in Germany’s 6-0 win over Armenia, although it must be said that Jamal Musiala — who replaced Sane in the second half — is going to be starting a lot of matches based on early-season form. And we haven’t even mentioned the usual suspects.

Leipzig not yet on the Marsch

Leipzig are off to their worst ever Bundesliga start through three matches. Each game has been unlike the others.

Against Mainz, when they lost 1-0, it was too slow and plodding. Against VfB Stuttgart, they dazzled with vibrant, non-stop, harrying football, running out 4-0 winners with Dominik Szoboszlai playing a starring role. Then at VfL Wolfsburg, they got themselves into a battle that suited their hosts and the result was another 1-0 defeat.

The German media has so far cut Jesse Marsch some slack. It’s early days for him, there is respect for what he achieved at FC Salzburg and he explains his ideas and philosophy disarmingly well. But with Bayern and Manchester City as the club’s next opponents, the degree of difficulty is now as high as it gets.

Andre Silva is still feeling his way and the creative axis of the team — Emil Forsberg and Christopher Nkunku — has performed only in patches. At least Dani Olmo is back from his post-Euros and Olympics holiday and I must say I like the look of Mohamed Simakan, Dayot Upamecano’s successor.

To finish my story from earlier, Sabine did indeed wreak havoc all over Germany that weekend, although not until after the Bayern-Leipzig game did she have her say in Munich. I spent two additional days in the Bavarian capital amid stormy, unpleasant weather, but at least it allowed me the chance to go back and savour the Leverkusen-Dortmund thriller in its entirety.

This time, it happens to be my commentary match for the Bundesliga world feed and then I’ll be watching Leipzig-Bayern live as a viewer. I have a feeling, if you love German football, your Saturday is similarly already accounted for.