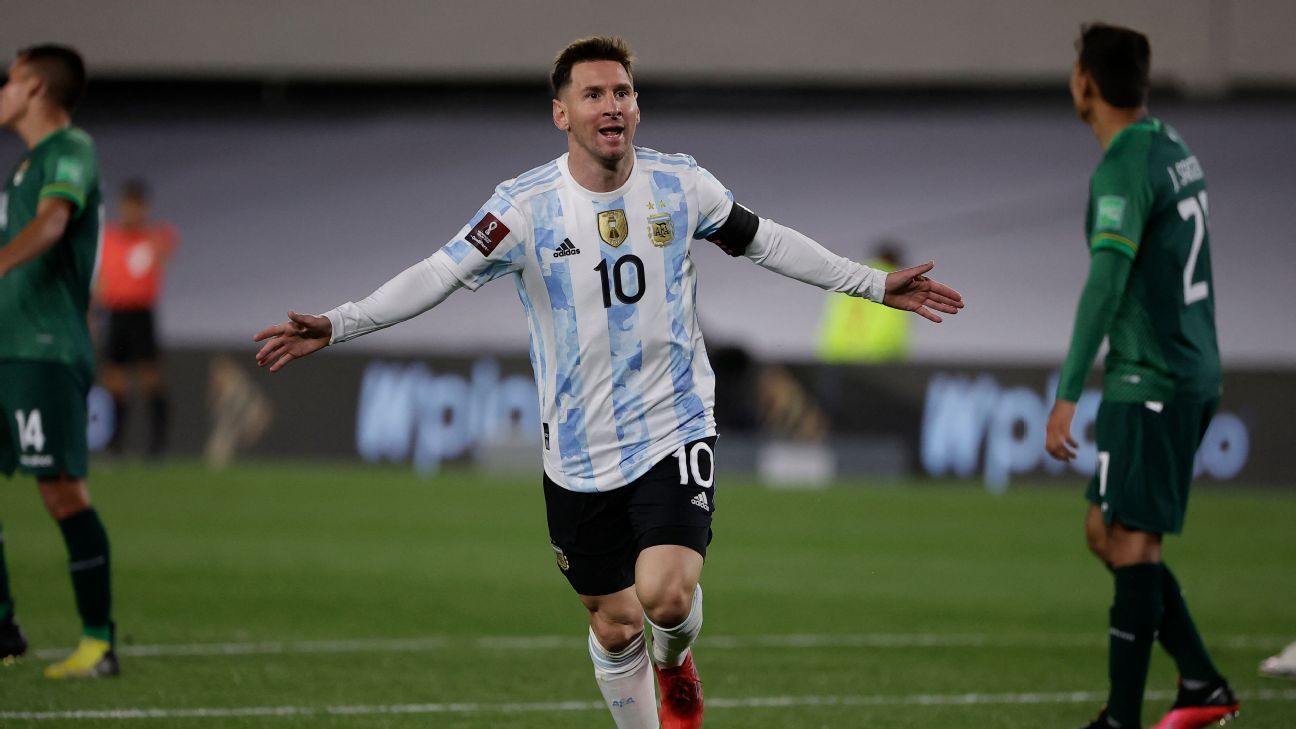 Messi scored all three goals in Argentina’s 3-0 win over Bolivia on Thursday in a World Cup qualifying match at the Monumental stadium in Buenos Aires, giving him two more than Pele, who had 77 career goals in international play.

Messi trails Brazilian duo Marta (109) and Cristiane (96) for the overall record for most goals scored by any South American player at the international level.

Third on the men’s list is Messi’s Paris Saint-Germain teammate Neymar, who has 69 international goals for Brazil.

“I was very nervous, I just wanted to enjoy the night. I waited a long time for this,” an emotional Messi said after the match. “We won the game that was the most important thing and now we can celebrate.”

Messi, 34, has had a memorable year — changing clubs from Barcelona to PSG and winning his first senior international football title this summer. He steered La Albiceleste to the Copa America crown in a 1-0 win over host Brazil.

“It was a unique moment [to win the Copa America] because of where and how we obtained the title,” Messi said.

“There was no better way to do and been able to celebrate the title now, it’s incredible. My mother, my brothers are here in the stands. They have suffered a lot … I’m very happy.”

With 26 goals in World Cup qualifying matches following his hat-trick against Bolivia, Messi also passes Uruguay star Luis Suarez — his former teammate at Barcelona — for most among CONMEBOL players.

With eight career goals vs. Bolivia in 11 games, it is Messi’s most goals against a single opponent while donning the Argentina shirt.

Messi is also his country’s all-time leading scorer, having moved past Gabriel Batistuta (54 goals) in 2016. He is also Argentina’s most capped player, with Thursday’s match against Bolivia marking his 153rd international appearance.

Prior to the Copa America win at the Maracana Stadium in Rio de Janeiro this summer, Messi had lost four major finals with Argentina’s senior side. They were beaten by Germany in the 2014 World Cup final and had lost in the final at the Copa America in 2007, 2015 and 2016.

Messi joined PSG over the summer on a shock free-agent move after two decades with Barcelona. Messi had been with Barcelona since 2001, joining the academy the year before.

Messi played 778 games at Barcelona, breaking Xavi Hernandez’s appearance record in the 2020-21 season. In addition, he scored 672 goals, another club record, and helped Barca win, among other trophies, 10 La Liga titles and the Champions League on four occasions.