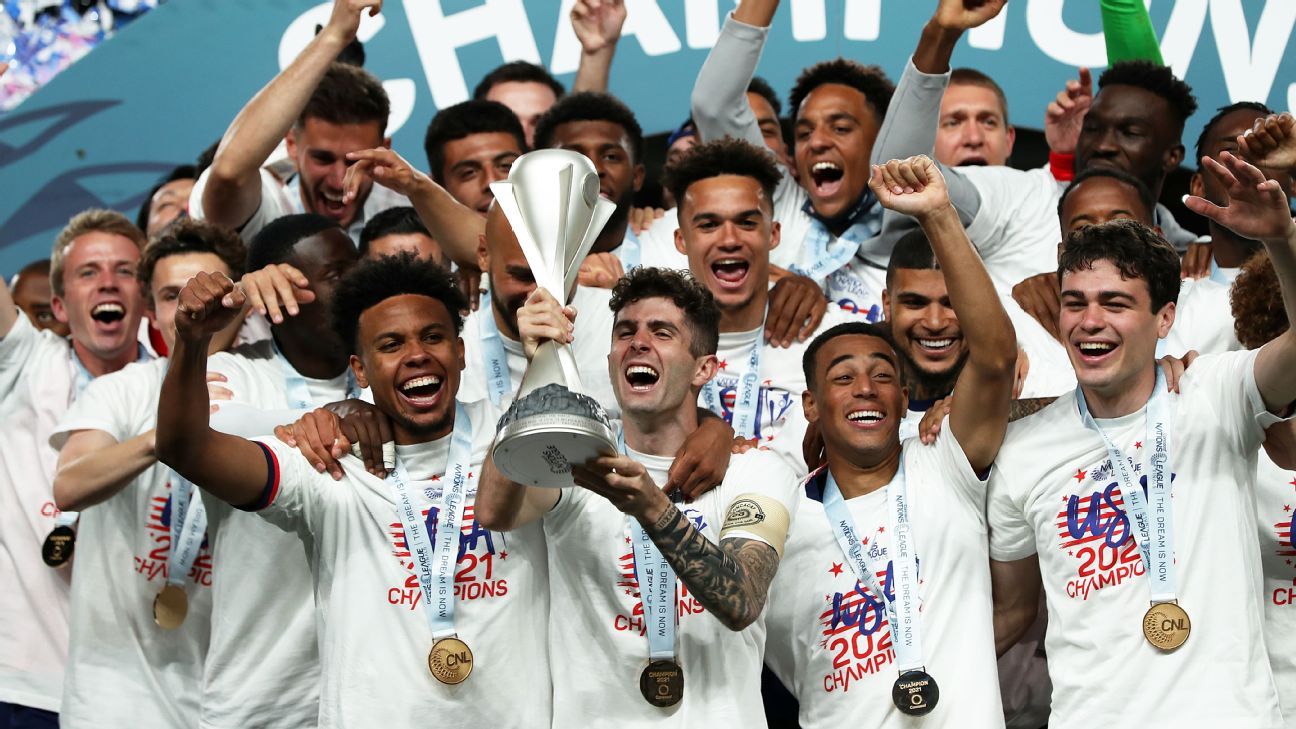 The time to exorcise demons — or try to, at least — has finally arrived. Exactly 1,423 days after a loss to Trinidad & Tobago prevented the United States men’s national team from qualifying for the 2018 FIFA World Cup, qualification for the 2022 competition finally begins. The USA’s 14-game path to Qatar begins on Thursday against El Salvador in San Salvador‘s Estadio Cuscatlan and finishes on March 30 in Costa Rica.

The first three matches of this rapid-fire schedule take place in September before things resume in October. Here are a few stats and notes to keep in mind as the competition finally begins.

The goal is 24 points

The past six CONCACAF World Cup qualification tournaments all featured six teams playing 10 matches each. While the 2018 qualification run was particularly strange — not only did the USA fail to qualify but Panama qualified with just 13 points — the dividing line has typically been around 15-17 points. Earn 17 or more and you qualify without exception. If you get 16 or fewer, you’re relying on circumstance to carry you through.

Due to the coronavirus, the format changed this time around, and now eight teams are playing 14 games each. With a couple of weaker teams in the field, there might be a couple of extra easy-win opportunities for the more high-quality countries, and that might alter the math a little. But 1.7 points per game is still a pretty high bar and would almost certainly result in a top-three finish and automatic qualification. Over 14 matches, that projects to about 24 points.

This compressed sprint of a schedule means the U.S. will play eight matches between now and Nov. 16; with 1.7 points per game as the guideline, the bar for this batch is therefore 13-14 points, equivalent to four wins and one or two draws. Of course, the USA’s schedule is pretty back-loaded in terms of quality, so perhaps the early bar should be a little bit higher.

World team ratings tend to separate the eight teams in the field into three approximate tiers: Mexico and the United States in Tier 1, a rising Canada and slipping Costa Rica in Tier 2, and El Salvador, Honduras, Jamaica and Panama in some order in Tier 3. This first batch of matches, then, features two Tier 3 road trips (El Salvador and Honduras) and a Tier 2 home game (Canada). October’s three-match swing features a Tier 2 home game (Costa Rica), a Tier 3 home game (Jamaica) and another Tier 3 road trip (Panama). Mexico doesn’t show up until the seventh match of qualifying (Nov. 12 in Cincinnati), while the USA’s first Tier 2 road trip doesn’t come until Jan. 30, 2022, at Canada.

It would save everyone some anxiety, then, if Gregg Berhalter’s team kept the dropped points to a minimum out of the gate.

It’s incredible to think about the small number of opportunities you get to use your genuine first-choice lineup in international play. In the past two years, Berhalter has been at the helm for 23 matches: 11 friendlies, six Gold Cup matches and six CONCACAF Nations League matches. He got a look at 74 different players in that span, 48 of whom played at least 100 minutes. (Only one, midfielder Sebastian Lletget, played more than 950.)

These matches have come primarily against lesser competition and rarely (if ever) in a genuine road setting, and the U.S. has performed well, winning 18 of 23 with two draws. But the heart of the roster — the quartet of attacking midfielder Christian Pulisic, winger Giovanni Reyna, midfielders Weston McKennie and Tyler Adams — played together just once in those 23 matches, in the Nations League victory over Mexico in June.

How the U.S. plays against Mexico does not typically pair up with how it plays as a favorite against a lesser team, but two other matches from this sample could be telling as we figure out what to expect over the next week: the closed-door friendlies against Wales and Panama from last November.

With Pulisic quickly trying to regain his fitness after a positive coronavirus test in August, we might not see the core foursome in action all that much over the coming week. But the trio of Reyna-McKennie-Adams should see an extended run, at least, just as it did against Wales and Panama when Pulisic was injured.

Berhalter’s possession preferences are clear. When possible, he wants the U.S. to hog the ball, pragmatically build play from the back and apply pressure in certain areas of the pitch. He proved flexible with his tactics this summer — with a second-choice lineup, the U.S. won the Gold Cup by beating Mexico with the more vertical, counter-attacking approach preferred by American coaches in decades past. But his preferences are obvious, and with his first-choice lineup (or close to it) on the field, we should see the U.S. indeed attempting to hog the ball over these first three matches.

Against Wales, that approach provided about as much sterility as the empty stadium in which they played. The U.S. controlled 61% of the possession and averaged 6.2 passes per possession to Wales’ 3.9. It began 19% of their possessions in the attacking third, while Wales began only 3% there. But against a hunkered-down opponent, it generated almost nothing in attack. With as much of the ball as the team could possibly want, the U.S. managed just seven shots at a middling 0.11 xG per shot. Only two of the shots provided any danger whatsoever — a miss from Konrad De La Fuente in the 33rd minute and a short-range shot from Lletget in the 45th minute that was saved by Danny Ward.

The Americans did effectively limit Wales’ counter-attacking potential (just four shots worth a total of 0.34 xG), and having McKennie (90 minutes) and Adams (71) in the midfield makes a significant difference in that regard. While the goalkeeping from each of the first-teamers — Manchester City‘s Zack Steffen, the New England Revolution‘s Matt Turner and Nottingham Forest’s Ethan Horvath — was stellar, the ability to snuff out attacks before they generate shots to begin with is among the most important attributes in the sport.

Against a more aggressive opponent, the U.S. thrived. Playing Panama in Austria, it faced a lot more pressure and occasionally struggled with it: Panama began 11% of its possessions in the attacking third. But the U.S. recovered quickly, allowing zero shots in those nine possessions and when it survived bouts of pressure, it created loads of opportunities. The U.S. attempted 15 shots at 0.18 xG per shot and scored six times — three times off of possessions that it began in the attacking third.

Granted, the most successful creators and attackers in the Panama match — Caen’s Nicholas Gioacchini (two goals on three shots) and PSV Eindhoven‘s Richie Ledezma (two assists on four chances created) — did not make the roster for the September qualifiers, but McKennie was an outright wrecking ball. He’ll be in uniform.

Herculez Gomez compares Christian Pulisic to Landon Donovan as he discusses whether the 22-year-old should be the USMNT’s captain.

El Salvador and Canada can press

Combining the stats from the 2019-20 CONCACAF Nations League and 2021 Gold Cup, only two teams began more possessions in the attacking third than the United States: Canada (10.3) and El Salvador (9.8).

With Bayern’s Alphonso Davies healthy and forward Jonathan David (Lille) and wingers Cyle Larin (Besiktas) and Tajon Buchanan (soon on his way to Club Brugge) all available, Canada boasts as much pure attacking speed as any team in the group. When all four of these guys were in the lineup during the preliminary World Cup qualification rounds in June, Canada outscored four opponents by a combined 15-0. Zooming out a bit and looking only at when the Davies-David-Larin trio is together, the team has won six of seven games by a combined 23-3.

Was the competition level dreadful in this sample? Absolutely. The Canadians lost to the only decent opponent on the list — 3-1 to Mexico in 2019 — but this is the most exciting young roster core Canada has potentially ever had, and only Larin is older than 22.

Even if the U.S. has more overall talent, Canada can create matchup advantages you have to address. If anyone can effectively pressure an American back line that’s usually, but definitely not always, stable on the ball, it’s John Herdman’s squad. In this regard, it was a bit surprising that Berhalter didn’t bring another steady-passing midfielder into the fold for these matches — someone such as Greuther Furth’s Julian Green, perhaps, or Venezia’s Gianluca Busio.

Mind you, El Salvador will also try like crazy to fluster America’s back line. This isn’t a team the U.S. has traditionally struggled with — America has won 14 of their past 16 meetings, with two draws and a scoring margin of 49-8 — but La Selecta play with energy and a strong identity, and it has brought solid results of late. El Salvador swept through six preliminary qualification matches without defeat, and although it lost a combined three times to Qatar and Mexico over the summer, each was by just a one-goal margin. Seattle Sounders right-back Alex Roldan (younger brother of America’s Cristian Roldan) and Houston Dynamo defensive midfielder Darwin Ceren give the team upside and defensive solidity, and although it doesn’t score a ton, it can frustrate the hell out of you in build-up play.

Among these first three opponents, Honduras is by far the most likely Wales of the bunch. It certainly looked the part in its 1-0 Nations League loss to the U.S. in June. Honduras created only 0.19 xG from seven shots and occupied 36% of the possession. Its primary goal was to hoof balls out of dangerous areas and bunker down, and while the Americans had all the possession they could possibly want, they didn’t find a breakthrough until Jordan Pefok’s 89th-minute goal.

Creating quality chances against packed-in defenses will be key

While opponents such as Mexico, Canada, El Salvador and Jamaica will at least selectively take the fight to the U.S., advancing stress-free through qualification will require strong execution against parked buses.

On the perimeter of the attack, the USA’s quality and potential are undeniable. Reyna, still only 18, has scored 14 goals with seven assists in all competitions (for club and country) over the past 12 months, and 20-year olds Brenden Aaronson and De La Fuente appear to be thriving with new clubs — Aaronson is a pressuring machine in a pressure-friendly Red Bull Salzburg system, and De La Fuente has been exciting early in his first season with Marseille (four chances created, two assists and an 89% completion rate in the attacking third in 268 minutes). Of course, this says nothing of Pulisic, who remains the most complete attacker in the player pool even if he’s been unfortunate from an injury and fitness standpoint.

Without a commanding presence at centre-forward, though, the team just didn’t have enough ideas for cracking open a stubborn defense like the one Wales features, which has been a problem for the U.S. player pool for a while now. Daryl Dike‘s emergence as a (nearly) world-class poacher in 2020-21 was intriguing, but he’s still working back toward fitness after some minor injury issues and will miss this September go-round. Berhalter did select serviceable options such as Werder Bremen’s Josh Sargent and Young Boys‘ Pefok, but maybe the most interesting name on the roster this time around is Ricardo Pepi.

The 18-year-old has scored 11 goals in 21 matches for FC Dallas this season and recently chose the U.S. over Mexico. He’s not a commanding physical presence at 6-foot-1, 163 pounds, but he is showing massive promise. How much of a run will Berhalter give him?

Via FiveThirtyEight’s Soccer Power Index, here are the USA’s odds for each of the first three qualifying matches:

Average expected points from this group of matches: 5.2.