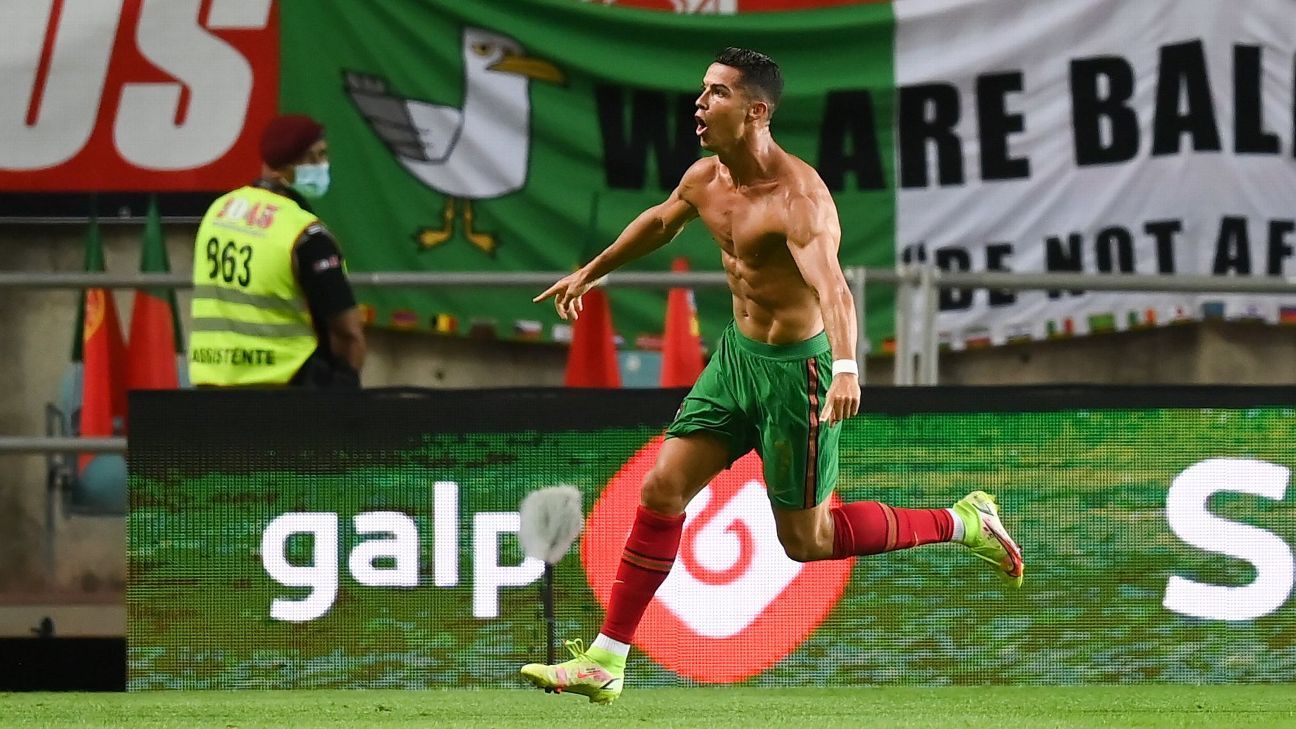 FARO, Portugal — If anyone is still wondering whether Manchester United are getting a Cristiano Ronaldo whose best days are firmly behind him, just ask the shell-shocked Republic of Ireland players who thought they had denied him a goal-scoring world record in Estadio Algarve, only to see the Portugal captain smash it and then add to it in the space of seven crazy minutes at the end of a 2-1 World Cup qualifying victory.

Nobody does remarkable football drama quite like Ronaldo, but this historic night in Faro was up there with all of the great moments of his incredible career, largely because, for 89 minutes, he was having one of those nights when everything seemed to be going against him and his team. But at the end of it, he had claimed the international scoring record solely for himself having been locked on 109 goals alongside former Iran striker Ali Daei since netting twice against France at Euro 2020.

“I’m extremely happy, I needed one goal and I’ve scored two,” Ronaldo said. “I’m very happy for the two goals that gave us the victory and for breaking the record.

“This record is mine and it is unique. I’m extremely happy and it’s another one for my career. It’s about motivation and the desire I have to continue playing football, also from this last contract I made, in which I was happy to return home.

“If we get up every day with the ambition to motivate and do better, to make the fans and our children happy, that is essential. It’s another record for the museum.”

Ronaldo is now on 111 goals for Portugal after scoring his 110th with a stunning header from an 89th-minute Goncalo Guedes cross. And the 36-year-old, who completed his return to United from Juventus on Monday, did it again with another header from close range in the sixth minute of stoppage time from Joao Mario‘s cross.

That goal prompted Ronaldo to race away in celebration, ripping off his top in the process. That led to him being yellow carded by referee Matej Jug; a booking that means he is suspended for Tuesday’s qualifier against Azerbaijan in Baku and therefore able to report earlier for duty at Old Trafford once again.

But while this ended up being a memorable occasion for the right reasons for Ronaldo, it could so easily have come to a shuddering halt after just 10 minutes.

With Portugal having been awarded a penalty following a Jeff Hendrick foul on Bruno Fernandes, Ronaldo grabbed the ball for the spot kick, sensing an easy opportunity to break the record. But at the same time, he lashed out at Ireland defender Dara O’Shea, who fell to the ground. Referee Jug was called to review the penalty decision by VAR, but for some reason, he was not asked to check the Ronaldo incident.

It was a very fortunate escape from a red card, but if Ronaldo thought his luck was in, he would have thought otherwise moments later when Ireland goalkeeper Gavin Bazunu, a 19-year-old Manchester City player who was relegated to English football’s fourth tier while on loan at Rochdale last season, dived to his right to save Ronaldo’s penalty. That was the seventh penalty miss from 21 taken in Ronaldo’s Portugal career.

Whisper it, but United manager Ole Gunnar Solskjaer might want to have a quiet word with his new signing about allowing Fernandes to continue as the first-choice spot-kick taker at Old Trafford. Good luck with that, Ole.

From the moment Bazunu saved his penalty, Ronaldo cut a frustrated figure. This really wasn’t how the script was supposed to play out, especially at a stadium where he had scored more goals (10) than anywhere else in his international career. This wasn’t one of the citadels of Lisbon or Porto, but an unremarkable stadium with two temporary stands on Portugal’s Algarve coast.

Due to the impact of the COVID-19 pandemic on the tourism industry in the Algarve, the Portuguese Football Federation chose this venue to “contribute to the region’s economic recovery” because it is also the home to one of the largest expat Irish communities outside North America. But ongoing COVID measures saw the attendance restricted to just 7,831 supporters, with no travelling fans allowed, so when Sheffield United’s John Egan headed Ireland ahead just before half-time, it really did seem like the omens were against Ronaldo and Portugal.

A tactical switch by coach Fernando Santos at the start of the second half, which saw Ronaldo move to the left and substitute Andre Silva play through the centre, gave Ronaldo more freedom to create his own chances.

Fernandes, who struggles to impress with Portugal, once again found it difficult to make an impact, with Santos favouring the ball being played through Bernardo Silva. Neither Fernandes nor Silva seemed capable of getting the ball to their talisman and it was painful to watch at times as Ronaldo increasingly threw his arms in the air in exasperation.

As the game wore on, Ronaldo’s desperation to score became obvious, too. On three occasions, he saw long-range efforts blocked by Irish defenders and then saw Bazunu dive full stretch to push away an 89th-minute free kick.

But with the clock ticking and Ireland on course for a huge win in Group A, Ronaldo did what Ronaldo does: He made a decisive impact when all around him had virtually given up. His record-breaking goal was classic Ronaldo: a powerful leap and pinpoint header, and the stadium erupted in joy and relief.

But that wasn’t enough for Ronaldo. He may have achieved his personal target, but Portugal still needed a win to maintain control of their World Cup qualification hopes and he did it again in the 96th minute. Another cross from the right, another incredible leap and yet again, the ball nestled in the corner of the net.

That goal saw the stadium erupt. It was a sensational end to the game, but you get the impression with Ronaldo that it merely marked the start of something else.

How about 120 goals and 200 games? Whatever he decides, don’t bet against him achieving it. That’s Ronaldo — he writes his own stories on a football pitch.